Comet ATLAS (C2019 Y4) is plunging toward the sun, and if it doesn’t fly apart it could soon become one of the brightest comets in years.

“Comet ATLAS continues to brighten much faster than expected,” says Karl Battams of the Naval Research Lab in Washington DC. “Some predictions for its peak brightness now border on the absurd.” 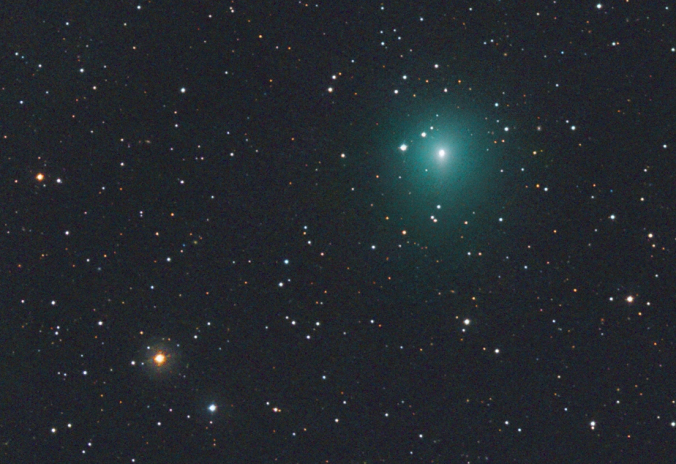 Above: Comet ATLAS (C/2019 Y4) photographed on March 6, 2020, by Austrian astrophotographer Michael Jäger. The comet’s diffuse green atmosphere is about twice as wide as the planet Jupiter.

The comet was discovered in December 2019 by the Asteroid Terrestrial-impact Last Alert System (ATLAS) in Hawaii. Astronomers quickly realized it might be special. On May 31, 2020, Comet ATLAS will pass deep inside the orbit of Mercury only 0.25 AU from the sun. If it can survive the blast furnace of solar heating, it could put on a good show.

However, no one expected the show to start this soon. More than 2 months before perihelion (closest approach to the sun), Comet ATLAS is already “heating up.” The worldwide Comet Observation Database shows it jumping from magnitude +17 in early February to +8 in mid-March–a 4000-fold increase in brightness. It could become visible to the naked eye in early April.

Can ATLAS sustain this crazy pace? If it has a big nucleus with large stores of frozen gas, then yes; we could get a very bright comet. Otherwise, Comet ATLAS might “run out of gas”, crumbling and fading as it approaches the sun.

Current best estimates of the comet’s peak brightness in May range from magnitude +1 to -5. If Comet ATLAS hits the high end of that range, a bit brighter than Venus, it could become visible in broad daylight.