There’s just something about this phone. From the moment I laid eyes on this thing, it just kind of made me happy. It’s small and adorable like a newborn puppy, and despite how petite it appears it photos, it looks and feels even smaller in person. And I’m not the only one that had this reaction. When I brought it into the office, people crowded around marveled. One person cooed at it, another said, “it’s perfect,” while a third remarked that this is the exact sort of thing they’d wished someone would make for years. 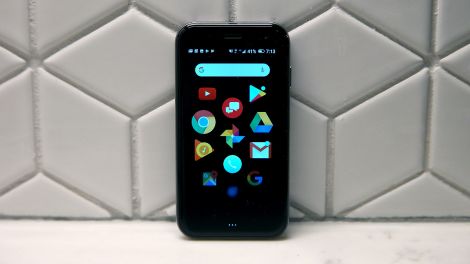 A super small phone from the rebirthed Palm brand

It’s incredibly tiny, but still good enough to be a full standalone phone

Camera quality isn’t great and it can’t detect 5GHz wi-fi; it’s billed as a companion device, and as such, its sales and pricing scheme is messy

From a crowd of tech bloggers, even I was taken aback with its reception. Size alone isn’t what makes this handset remarkable. In part what makes the device exciting is that it’s the rebirth of Palm, the same company that made big ‘ole PDAs and the ill-fated Palm Pre. Maybe more interestingly, Palm’s new phone also envisions an entirely different way of using and living with tech.

For something so small, it’s pretty mysterious, and I’m actually not even entirely sure what to call it. The company that makes it is Palm, but what about the device itself? Is it just Phone with a capital P, or is it the Palm Palm as its comical listing on Verizon’s website suggests? For now, I’ve been going with Baby Phone or the just the mononymous Palm, because like Grimes, Wario, and Rasputin, this gadget is cool enough to need only a single name.

Now let’s talk about size. I don’t mean its actual dimensions—which are about the same as a credit card—but the reason behind why it’s so tiny. Recently, a lot of companies have been pushing the idea of digital wellness, with Google and Apple adding features to Android and iOS that help you track how much time you spend on your phone. That’s all fine, but in some ways, buying an $800 phone and then putting restrictions on it is like buying an Aston Martin and never driving it faster than 55 mph.

So instead of spending a lot of money on a phone that constantly tempts you, why not get something small and nimble that can still handle traditional smartphone duties, but doesn’t also ruin your life. That’s the real inspiration behind the Palm’s pint-sized body and mini display. You’re supposed to pull it out, check the screen real quick, and then put it away.

The Palm is a more straightforward way to fight smartphone addiction, and while it does quite well at replacing your regular phone, it has some quirks and a few sore spots you should know about. I’m going to break things down The Good, the Bad, and the Ugly style.