For those who don’t remember: Winamp was the MP3 player of choice around the turn of the century, but went through a rocky period during Aol ownership (our former parent company) and failed to counter the likes of iTunes and the onslaught of streaming services, and more or less crumbled over the years. The original app, last updated in 2013, still works, but to say it’s long in the tooth would be something of an understatement (the community has worked hard to keep it updated, however). So it’s with pleasure that I can confirm rumors that substantial updates are on the way.

“There will be a completely new version next year, with the legacy of Winamp but a more complete listening experience,” said Alexandre Saboundjian, CEO of Radionomy, the company that bought Winamp (or what remained of it) in 2014. “You can listen to the MP3s you may have at home, but also to the cloud, to podcasts, to streaming radio stations, to a playlist you perhaps have built.”

“People want one single experience,” he concluded. “I think Winamp is the perfect player to bring that to everybody. And we want people to have it on every device.” 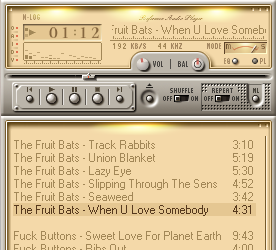 Laugh if you want but I laugh back

Now, I’m a Winamp user myself. And while I’ve been saddened by the drama through which the iconic MP3 player and the team that created it have gone (at the hands of TechCrunch’s former parent company, Aol), I can’t say I’ve been affected by it in any real way. Winamp 2 and 5 have taken me all the way from Windows 98 SE to 10 with nary a hiccup, and the player is docked just to the right of this browser window as I type this. (I use the nucleo_nlog skin.)

And although I bear the burden of my colleagues’ derisive comments for my choice of player, I’m far from alone. Winamp has as many as a hundred million monthly users, most of whom are outside the U.S. This real, engaged user base could be a powerful foot in the door for a new platform — mobile-first, but with plenty of love for the desktop too.

“Winamp users really are everywhere. It’s a huge number,” said Saboundjian. “We have a really strong and important community. But everybody ‘knows’ that Winamp is dead, that we don’t work on it any more. This is not the case.”

Source: Winamp returns in 2019 to whip the llama’s ass harder than ever | TechCrunch

As a Winamp user myself, I’m really happy, but hope they manage to keep it small and lightweight…