Google services such as YouTube and Gmail started the week with an almighty bang as the Chocolate Factory’s cloud came crashing to the ground.

Despite an insistence from the company’s various health dashboards that all was fine and dandy, it most definitely was not.

Those seeking distraction in video form were treated to YouTube’s “Something went wrong…” monkey, while others wishing to express their disquiet via Gmail were shown a 502 code or a suggestion to try again in five minutes. 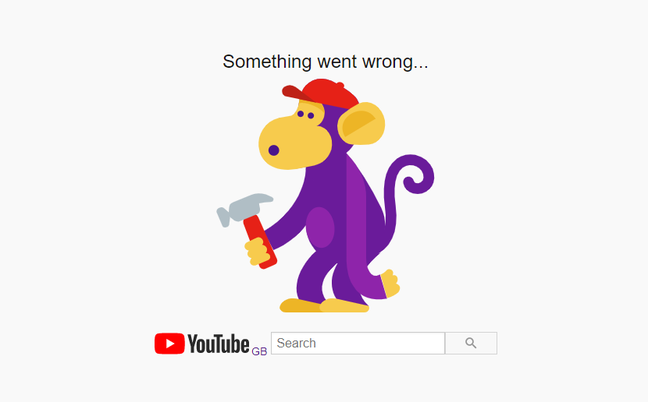 The issue appears to have afflicted vast swathes of the globe, with users in the Philippines and India joining Europeans and US early birds in being unexpectedly ejected from the Chocolate Factory’s services.

Problems seemed to start at around 11:30 GMT. At time of writing YouTube was inaccessible, Gmail was borked, Drive was down, image search failed (unless an error code was what you were looking for), and Docs didn’t seem happy.

Some things still worked – we found links to existing Google Docs were working and the search for which the company is famed appeared to be running. So there was no need to resort to something like Bing.

Google is no stranger to outages. Pretty much everything from GCP to G Suite fell over into a heap back in August.

As for today’s outage, Google’s Workspace dashboard was aglow with green lights, even if the reality was quite different.

Source: World+dog share in collective panic attack as Google slides off the face of the internet • The Register