Researchers in Sussex have built a device that displays 3D animated objects that can talk and interact with onlookers.

A demonstration of the display showed a butterfly flapping its wings, a countdown spelled out by numbers hanging in the air, and a rotating, multicoloured planet Earth. Beyond interactive digital signs and animations, scientists want to use it to visualise and even feel data. 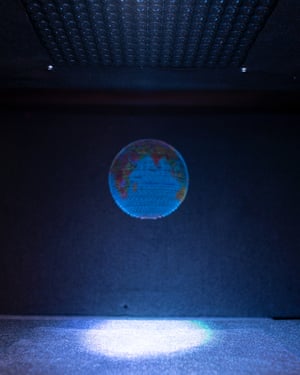 it uses a 3D field of ultrasound waves to levitate a polystyrene bead and whip it around at high speed to trace shapes in the air.

The 2mm-wide bead moves so fast, at speeds approaching 20mph, that it traces out the shape of an object in less than one-tenth of a second. At such a speed, the brain doesn’t see the moving bead, only the completed shape it creates. The colours are added by LEDs built into the display that shine light on the bead as it zips around.

Because the images are created in 3D space, they can be viewed from any angle. And by careful control of the ultrasonic field, the scientists can make objects speak, or add sound effects and musical accompaniments to the animated images. Further manipulation of the sound field enables users to interact with the objects and even feel them in their hands.

The images are created between two horizontal plates that are studded with small ultrasonic transducers. These create an inaudible 3D sound field that contains a tiny pocket of low pressure air that traps the polystyrene bead. Move the pocket around, by tweaking the output of the transducers, and the bead moves with it.

The most basic version of the display creates 3D colour animations, but writing in the journal Nature, the scientists describe how they improved the display to produce sounds and tactile responses to people reaching out to the image.

Speech and other sounds, such as a musical accompaniment, were added by vibrating the polystyrene bead as it hares around. The vibrations can be tuned to produce soundwaves across the entire range of human hearing, creating, for example, crisp and clear speech. Another trick makes the display tactile by manipulating the ultrasonic field to create a virtual “button” in mid-air.

The prototype uses a single bead and can create images inside a 10cm-wide cube of air. But future displays could use more powerful transducers to make larger animations, and employ multiple beads at once. Subramanian said existing computer software can be used to ensure the tiny beads do not crash into one another, although choreographing the illumination of multiple beads mid-air is another problem.

“The interesting thing about the tactile content is that it’s created using ultrasound waves. Unlike the simple vibrations most people are familiar with through smartphones or games consoles, the ultrasound waves move through the air to create precise patterns against your hands. This allows multimedia experiences where the objects you feel are just as rich and dynamic as the objects you see in the display.”

Julie Williamson, also at Glasgow, said levitating displays are a first step towards truly interactive 3D displays. “I imagine a future where 3D displays can create experiences that are indistinguishable from the physical objects they are simulating,” she said.