We’ve already covered what a ridiculous, pathetic grift the Oracle/TikTok deal was. Despite it being premised on a “national security threat” from China, because the app might share some data (all of which is easily buyable from data brokers) with Chinese officials, the final deal cured none of that, left the Chinese firm ByteDance with 80% ownership of TikTok, and gave Trump supporters at Oracle a fat contract — and allowed Trump to pretend he did something.

Of course, what he really did was hand China a huge gift. In response to the deal, state media in China is now highlighting how the Chinese government can use this deal as a model for the Chinese to force the restructuring of US tech companies, and force the data to be controlled by local companies in China. This is from the editor-in-chief of The Global Times, a Chinese, state-sponsored newspaper: 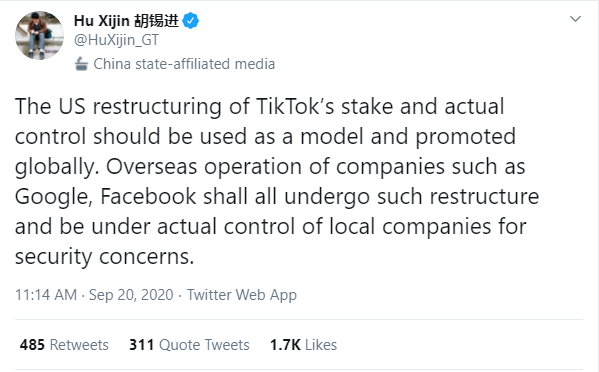 The US restructuring of TikTok’s stake and actual control should be used as a model and promoted globally. Overseas operation of companies such as Google, Facebook shall all undergo such restructure and be under actual control of local companies for security concerns.

So, beyond doing absolutely nothing to solve the “problem” that politicians in the US laid out, the deal works in reverse. It’s given justification for China to mess with American companies in the same way, and push to expose more data to the Chinese government.

Meanwhile, the same Twitter feed says that it’s expected that officials in Beijing are going to reject the deal from their end, and seek to negotiate one even more favorable to China’s “national security interests and dignity.”

So, beyond everything else, Trump’s “deal” has probably done more to help China, and harm data privacy and protection, while also handing China a justification playbook to do so: “See, we’re just following your lead!”

Source: Blowback Time: China Says TikTok Deal Is A Model For How It Should Deal With US Companies In China | Techdirt