Jeff Bezos’ rocket company, Blue Origin, became the subject of a federal review this fall after a group of 21 current and former employees co-signed an essay that raised serious questions about the safety of the company’s rockets — including the rocket making headlines for flying Bezos and other celebrities to space. 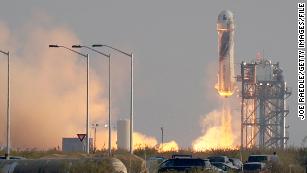 But that review was hamstrung by a lack of legal protections for whistleblowers in the commercial spaceflight industry, according to emails from Federal Aviation Administration investigators that were obtained by CNN Business.
The FAA also confirmed in a statement Friday that its Blue Origin review is now closed, saying the “FAA investigated the safety allegations made against Blue Origin’s human spaceflight program” and “found no specific safety issues.”
The emails obtained by CNN Business, however, reveal that investigators were not able to speak with any of the engineers who signed the letter anonymously. Investigators also were not able to go to Blue Origin and ask for documents or interviews with current employees or management, according to the FAA.
The situation highlights how commercial spaceflight companies like Blue Origin are operating in a regulatory bubble, insulated from much of the scrutiny other industries are put under. There are no federal whistleblower statues that would protect employees in the commercial space industry if they aid FAA investigators, according to the agency.
[…]