An antivirus program used by hundreds of millions of people around the world is selling highly sensitive web browsing data to many of the world’s biggest companies, a joint investigation by Motherboard and PCMag has found. Our report relies on leaked user data, contracts, and other company documents that show the sale of this data is both highly sensitive and is in many cases supposed to remain confidential between the company selling the data and the clients purchasing it.

The documents, from a subsidiary of the antivirus giant Avast called Jumpshot, shine new light on the secretive sale and supply chain of peoples’ internet browsing histories. They show that the Avast antivirus program installed on a person’s computer collects data, and that Jumpshot repackages it into various different products that are then sold to many of the largest companies in the world. Some past, present, and potential clients include Google, Yelp, Microsoft, McKinsey, Pepsi, Sephora, Home Depot, Condé Nast, Intuit, and many others. Some clients paid millions of dollars for products that include a so-called “All Clicks Feed,” which can track user behavior, clicks, and movement across websites in highly precise detail.

Avast claims to have more than 435 million active users per month, and Jumpshot says it has data from 100 million devices. Avast collects data from users that opt-in and then provides that to Jumpshot, but multiple Avast users told Motherboard they were not aware Avast sold browsing data, raising questions about how informed that consent is. 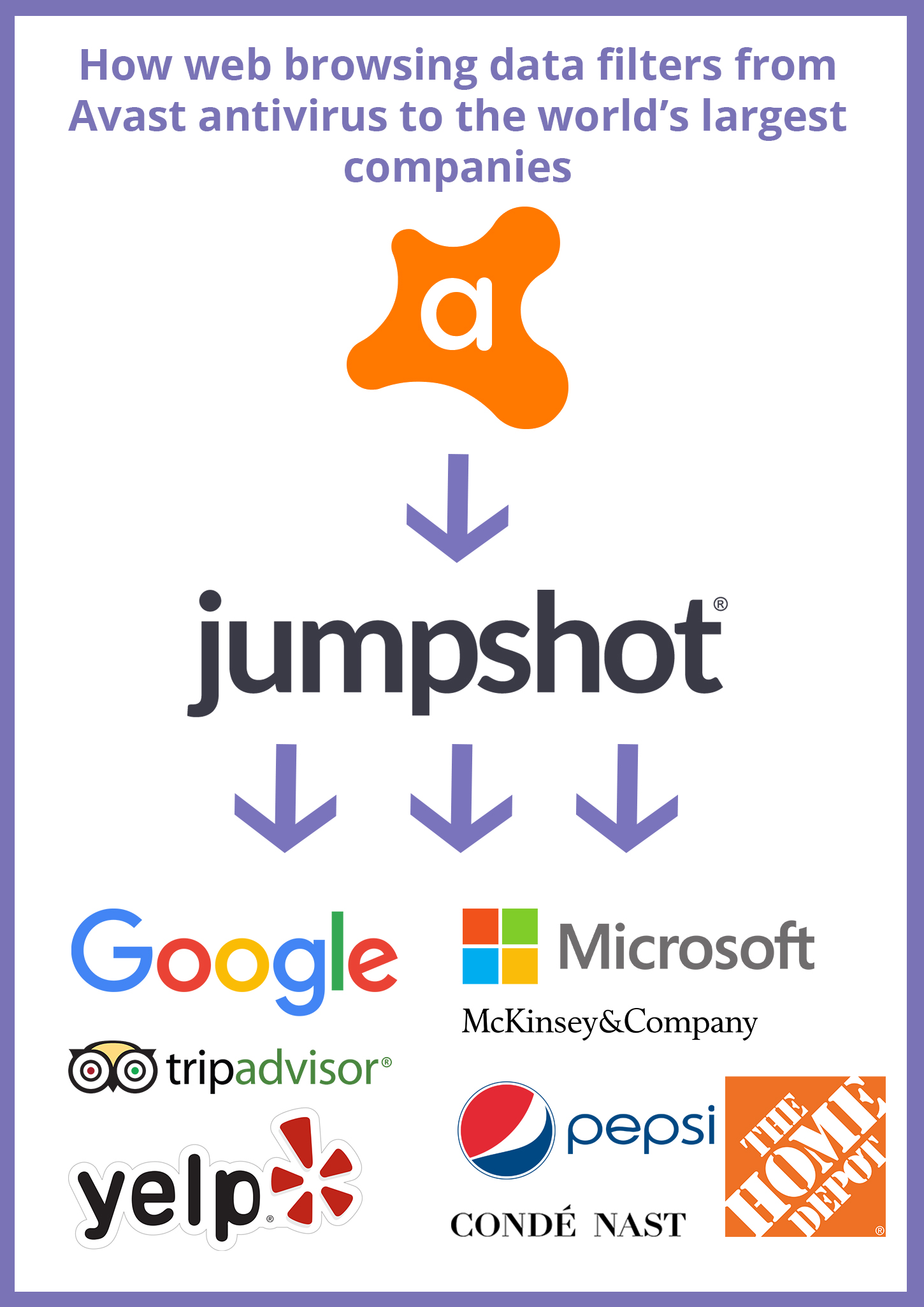 Until recently, Avast was collecting the browsing data of its customers who had installed the company’s browser plugin, which is designed to warn users of suspicious websites. Security researcher and AdBlock Plus creator Wladimir Palant published a blog post in October showing that Avast harvest user data with that plugin. Shortly after, browser makers Mozilla, Opera, and Google removed Avast’s and subsidiary AVG’s extensions from their respective browser extension stores. Avast had previously explained this data collection and sharing in a blog and forum post in 2015. Avast has since stopped sending browsing data collected by these extensions to Jumpshot, Avast said in a statement to Motherboard and PCMag.

However, the data collection is ongoing, the source and documents indicate. Instead of harvesting information through software attached to the browser, Avast is doing it through the anti-virus software itself. Last week, months after it was spotted using its browser extensions to send data to Jumpshot, Avast began asking its existing free antivirus consumers to opt-in to data collection, according to an internal document.

“If they opt-in, that device becomes part of the Jumpshot Panel and all browser-based internet activity will be reported to Jumpshot,” an internal product handbook reads. “What URLs did these devices visit, in what order and when?” it adds, summarising what questions the product may be able to answer.

Senator Ron Wyden, who in December asked Avast why it was selling users’ browsing data, said in a statement, “It is encouraging that Avast has ended some of its most troubling practices after engaging constructively with my office. However I’m concerned that Avast has not yet committed to deleting user data that was collected and shared without the opt-in consent of its users, or to end the sale of sensitive internet browsing data. The only responsible course of action is to be fully transparent with customers going forward, and to purge data that was collected under suspect conditions in the past.”

On its website and in press releases, Jumpshot names Pepsi, and consulting giants Bain & Company and McKinsey as clients.

As well as Expedia, Intuit, and Loreal, other companies which are not already mentioned in public Jumpshot announcements include coffee company Keurig, YouTube promotion service vidIQ, and consumer insights firm Hitwise. None of those companies responded to a request for comment.

On its website, Jumpshot lists some previous case studies for using its browsing data. Magazine and digital media giant Condé Nast, for example, used Jumpshot’s products to see whether the media company’s advertisements resulted in more purchases on Amazon and elsewhere. Condé Nast did not respond to a request for comment.

Jumpshot sells a variety of different products based on data collected by Avast’s antivirus software installed on users’ computers. Clients in the institutional finance sector often buy a feed of the top 10,000 domains that Avast users are visiting to try and spot trends, the product handbook reads.

Another Jumpshot product is the company’s so-called “All Click Feed.” It allows a client to buy information on all of the clicks Jumpshot has seen on a particular domain, like Amazon.com, Walmart.com, Target.com, BestBuy.com, or Ebay.com.

In a tweet sent last month intended to entice new clients, Jumpshot noted that it collects “Every search. Every click. Every buy. On every site” [emphasis Jumpshot’s.]

One company that purchased the All Clicks Feed is New York-based marketing firm Omnicom Media Group, according to a copy of its contract with Jumpshot. Omnicom paid Jumpshot $2,075,000 for access to data in 2019, the contract shows. It also included another product called “Insight Feed” for 20 different domains. The fee for data in 2020 and then 2021 is listed as $2,225,000 and $2,275,000 respectively, the document adds.

The internal product handbook says that device IDs do not change for each user, “unless a user completely uninstalls and reinstalls the security software.”