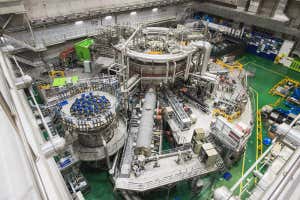 A nuclear fusion reaction has lasted for 30 seconds at temperatures in excess of 100 million°C. While the duration and temperature alone aren’t records, the simultaneous achievement of heat and stability brings us a step closer to a viable fusion reactor – as long as the technique used can be scaled up.

Most scientists agree that viable fusion power is still decades away, but the incremental advances in understanding and results keep coming. An experiment conducted in 2021 created a reaction energetic enough to be self-sustaining, conceptual designs for a commercial reactor are being drawn up, while work continues on the large ITER experimental fusion reactor in France.

Now Yong-Su Na at Seoul National University in South Korea and his colleagues have succeeded in running a reaction at the extremely high temperatures that will be required for a viable reactor, and keeping the hot, ionised state of matter that is created within the device stable for 30 seconds.

Controlling this so-called plasma is vital. If it touches the walls of the reactor, it rapidly cools, stifling the reaction and causing significant damage to the chamber that holds it. Researchers normally use various shapes of magnetic fields to contain the plasma – some use an edge transport barrier (ETB), which sculpts plasma with a sharp cut-off in pressure near to the reactor wall, a state that stops heat and plasma escaping. Others use an internal transport barrier (ITB) that creates higher pressure nearer the centre of the plasma. But both can create instability.

Na’s team used a modified ITB technique at the Korea Superconducting Tokamak Advanced Research (KSTAR) device, achieving a much lower plasma density. Their approach seems to boost temperatures at the core of the plasma and lower them at the edge, which will probably extend the lifespan of reactor components.