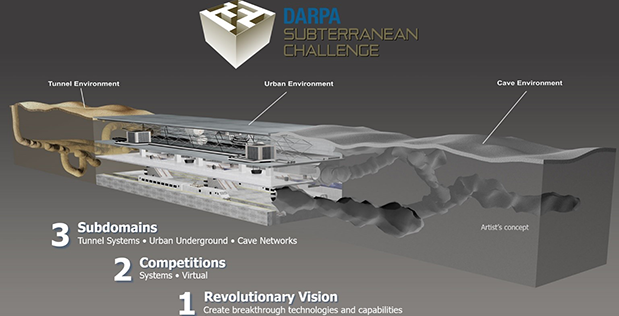 After three years of development, DARPA Subterranean (SubT) Challenge teams will get the chance to compete in the Final Event being held at the Louisville Mega Cavern in Louisville, Kentucky on September 21-23, 2021.

The DARPA SubT Challenge aims to develop innovative technologies that can rapidly map, navigate, and search complex underground environments such as human-made tunnel systems, urban undergrounds, and natural cave networks. Teams compete by demonstrating how their autonomy, networking, perception, and mobility capabilities perform on either physical courses in the Systems Competition or simulated environments in the Virtual Competition. The best performing team in the Systems Competition will be awarded a $2 million prize while the best performing team in the Virtual Competition will be awarded a $750,000 prize.

Over the last two years, teams faced a series of preliminary circuit events – the Tunnel Circuit, Urban Circuit, and Cave Circuit – to demonstrate how their solutions address the unique challenges of each subdomain. Teams will now tackle competition courses that include challenge elements from all three subdomains at the same time.

“Whether it’s the systems courses that we are building inside the Mega Cavern, or the wildly varying virtual environments we’re designing in the SubT Virtual Testbed, I’m excited to see how all of the SubT Challenge competitors build on the knowledge they gained during the Circuit Events to be successful in the Final Event.” said Dr. Timothy Chung, program manager for the Subterranean Challenge in DARPA’s Tactical Technology Office.

While many competitors are already preparing for the Final Event, new teams still have an opportunity to qualify for the Systems and Virtual Competitions. In order to participate, teams must deploy autonomous robotic systems – either real or virtual – into the competition courses to map, navigate, and search for artifacts of interest. The locations of each artifact must be reported with an accuracy of at least five meters to score a point. The competition courses are intentionally designed to emulate the dangers of rescue efforts in collapsed mines, post-earthquake search and rescue in urban underground settings, and cave rescue operations for injured or lost spelunkers.

For additional information on the DARPA Subterranean Challenge, including how to compete in this September’s event, please visit www.subtchallenge.com