Android may have started with the mantra that developers are allowed to do anything as long as they can code it, but things have changed over the years as security and privacy became higher priorities. Every major update over the last decade has shuttered features or added restrictions in the name of protecting users, but some sacrifices may not have been entirely necessary. Another Android 11 trade-off has emerged, this time taking away the ability for users to select third-party camera apps to take pictures or videos on behalf of other apps, forcing users to rely only on the built-in camera app.

At the heart of this change is one of the defining traits of Android: the Intent system. Let’s say you need to take a picture of a novelty coffee mug to sell through an auction app. Since the auction app wasn’t built for photography, the developer chose to leave that up to a proper camera app. This where the Intent system comes into play. Developers simply create a request with a few criteria and Android will prompt users to pick from a list of installed apps to do the job. 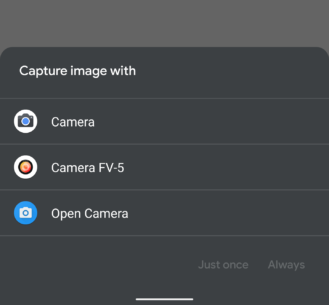 However, things are going to change with Android 11 for apps that ask for photos or videos. Three specific intents will cease to work like they used to, including: VIDEO_CAPTURE, IMAGE_CAPTURE, and IMAGE_CAPTURE_SECURE. Android 11 will now automatically provide the pre-installed camera app to perform these actions without ever searching for other apps to fill the role.

Starting in Android 11, only pre-installed system camera apps can respond to the following intent actions:

If more than one pre-installed system camera app is available, the system presents a dialog for the user to select an app. If you want your app to use a specific third-party camera app to capture images or videos on its behalf, you can make these intents explicit by setting a package name or component for the intent.

Google describes the change in a list of new behaviors in Android 11, and further confirmed it in the Issue Tracker. Privacy and security are cited as the reason, but there’s no discussion about what exactly made those intents dangerous. Perhaps some users were tricked into setting a malicious camera app as the default and then using it to capture things that should have remained private.

“… we believe it’s the right trade-off to protect the privacy and security of our users.” — Google Issue Tracker.

Not only does Android 11 take the liberty of automatically launching the pre-installed camera app when requested, it also prevents app developers from conveniently providing their own interface to simulate the same functionality. I ran a test with some simple code to query for the camera apps on a phone, then ran it on devices running Android 10 and 11 with the same set of camera apps installed. Android 10 gave back a full set of apps, but Android 11 reported nothing, not even Google’s own pre-installed Camera app.

As Mark Murphy of CommonsWare points out, Google does prescribe a workaround for developers, although it’s not very useful. The documentation advises explicitly checking for installed camera apps by their package names — meaning developers would have to pick preferred apps up front — and sending users to those apps directly. Of course, there are other ways to get options without identifying all package names, like getting a list of all apps and then manually searching for intent filters, but this seems like an over-complication.

Source: Android 11 is taking away the camera picker, forcing people to only use the built-in camera