These American photojournalists and attorneys said they suspected the U.S. government was monitoring them closely but until now, they couldn’t prove it.

Now, documents leaked to NBC 7 Investigates show their fears weren’t baseless. In fact, their own government had listed their names in a secret database of targets, where agents collected information on them. Some had alerts placed on their passports, keeping at least three photojournalists and an attorney from entering Mexico to work.

The documents were provided to NBC 7 by a Homeland Security source on the condition of anonymity, given the sensitive nature of what they were divulging.

The source said the documents or screenshots show a SharePoint application that was used by agents from Customs and Border Protection (CBP) Immigration and Customs Enforcement (ICE), the U.S. Border Patrol, Homeland Security Investigations and some agents from the San Diego sector of the Federal Bureau of Investigations (FBI).

The intelligence gathering efforts were done under the umbrella of “Operation Secure Line,” the operation designated to monitor the migrant caravan, according to the source.

The documents list people who officials think should be targeted for screening at the border.

The individuals listed include ten journalists, seven of whom are U.S. citizens, a U.S. attorney, and 47 people from the U.S. and other countries, labeled as organizers, instigators or their roles “unknown.” The target list includes advocates from organizations like Border Angels and Pueblo Sin Fronteras.

To view the documents, click here or the link below. 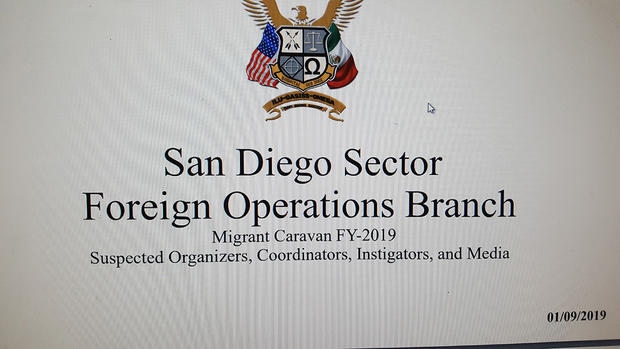 NBC 7 Investigates is blurring the names and photos of individuals who haven’t given us permission to publish their information.

In addition to flagging the individuals for secondary screenings, the Homeland Security source told NBC 7 that the agents also created dossiers on each person listed.

“We are a criminal investigation agency, we’re not an intelligence agency,” the Homeland Security source told NBC 7 Investigates. “We can’t create dossiers on people and they’re creating dossiers. This is an abuse of the Border Search Authority.”

One dossier, shared with NBC 7, was on Nicole Ramos, the Refugee Director and attorney for Al Otro Lado, a law center for migrants and refugees in Tijuana, Mexico. The dossier included personal details on Ramos, including specific details about the car she drives, her mother’s name, and her work and travel history.

After sharing the documents with Ramos, she said Al Otro Lado is seeking more information on why she and other attorneys at the law center have been targeted by border officials.

“The document appears to prove what we have assumed for some time, which is that we are on a law enforcement list designed to retaliate against human rights defenders who work with asylum seekers and who are critical of CBP practices that violate the rights of asylum seekers,” Ramos told NBC 7 by email.

Customs and Border Protection has the authority to pull anyone into secondary screenings, but the documents show the agency is increasingly targeting journalists, attorneys, and immigration advocates. Former counterterrorism officials say the agency should not be targeting individuals based on their profession.