Google has introduced “continuous match mode” for apps on its voice-powered Assistant platform, where it will listen to everything without pausing. At the same time it has debuted related developer tools, new features, and the ability to display web content on its Smart Display hardware using the AMP component framework.

The Chocolate Factory has big plans for its voice assistant. “We consider voice to be the biggest paradigm shift around us,” said director of product Baris Gultekin, speaking at the Voice Global summit, where the new features were introduced.

The goal is “ambient computing”, where you can interact with the big G anywhere at any time, so pervasively that you do not notice it. Voice interaction is a key part of this since it extends the ability to perform searches or run applications to scenarios where tapping a keyboard or touching a display are not possible.

Google Assistant exists in many guises such as on smartphones and watches, TVs, PCs, and also on dedicated hardware, such as the voice-only Google Home and Google Home Mini, or with “smart display” screens on the Google Nest Hub or devices from Lenovo and Harman. While assistant devices have been popular, Android phones (which nag you to set up the Assistant) must form the largest subset of users. Over all the device types, the company claims over 500 million active users.

Actions Builder will “replace DialogFlow as the preferred way to develop actions on the assistant,” said Shodjai. 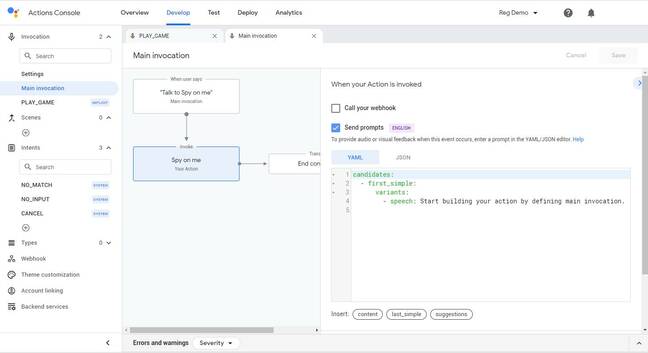 Trying out the new Action Builder, we discovered that running an action under development is impossible if you have the Web and App Activity permission, which lets Google keep a record of your actions, disabled. A dialog appears prompting you to enable it. It is a reminder of how Google Assistant is entwined with the notion that you give Google your data in return for personalised experiences.

“Sometimes you want to build experiences that enable the mic to remain open, to enable users to speak more naturally with your action, without waiting for a change in mic states,” said Shodjai at the summit and in the developer post.

“Today we are announcing an early access program for Continuous Match Mode, which allows the assistant to respond immediately to user’s speech enabling more natural and fluid experiences. This is done transparently, so that before the mic opens the assistant will announce, ‘the mic will stay open temporarily’, so users know they can now speak freely without waiting for additional prompts.”

The mode is not yet publicly documented. The demonstrated example was for a game with jolly cartoon pictures; but there may be privacy implications since in effect this setting lets the action continue to listen to everything while the mode is active.

Shodjai did not explain how users will end a Continuous Match Mode session but presumably this will be either after a developer-defined exit intent, or via a system intent as with existing actions. Until that happens, the action will be able to keep running.

Just as with personalisation via tracking and data collection, privacy and pervasive computing do not sit comfortably together, and with the new Continuous Match Mode a little more privacy slips away.

Source: Google isn’t even trying to not be creepy: ‘Continuous Match Mode’ in Assistant will listen to everything until it’s disabled • The Register