NB you can disable outgoing communication in the public network using windows defender by using the instructions here (HP).

At first the setup process was so simple that even a computer programmer could do it. But then, after I had finished removing pieces of cardboard and blue tape from the various drawers of the machine, I noticed that the final step required the downloading of an app of some sort onto a phone or computer. This set off my crapware detector.

It’s possible that I was being too cynical. I suppose that it was theoretically possible that the app could have been a thoughtfully-constructed wizard, which did nothing more than gently guide non-technical users through the sometimes-harrowing process of installing and testing printer drivers. It was at least conceivable that it could then quietly uninstall itself, satisfied with a simple job well done.

Of course, in reality it was a way to try and get people to sign up for expensive ink subscriptions and/or hand over their email addresses, plus something even more nefarious that we’ll talk about shortly (there were also some instructions for how to download a printer driver tacked onto the end). This was a shame, but not unexpected. I’m sure that the HP ink department is saddled with aggressive sales quotas, and no doubt the only way to hit them is to ruthlessly exploit people who don’t know that third-party cartridges are just as good as HP’s and are much cheaper. Fortunately, the careful user can still emerge unscathed from this phase of the setup process by gingerly navigating the UI patterns that presumably do fool some people who aren’t paying attention. 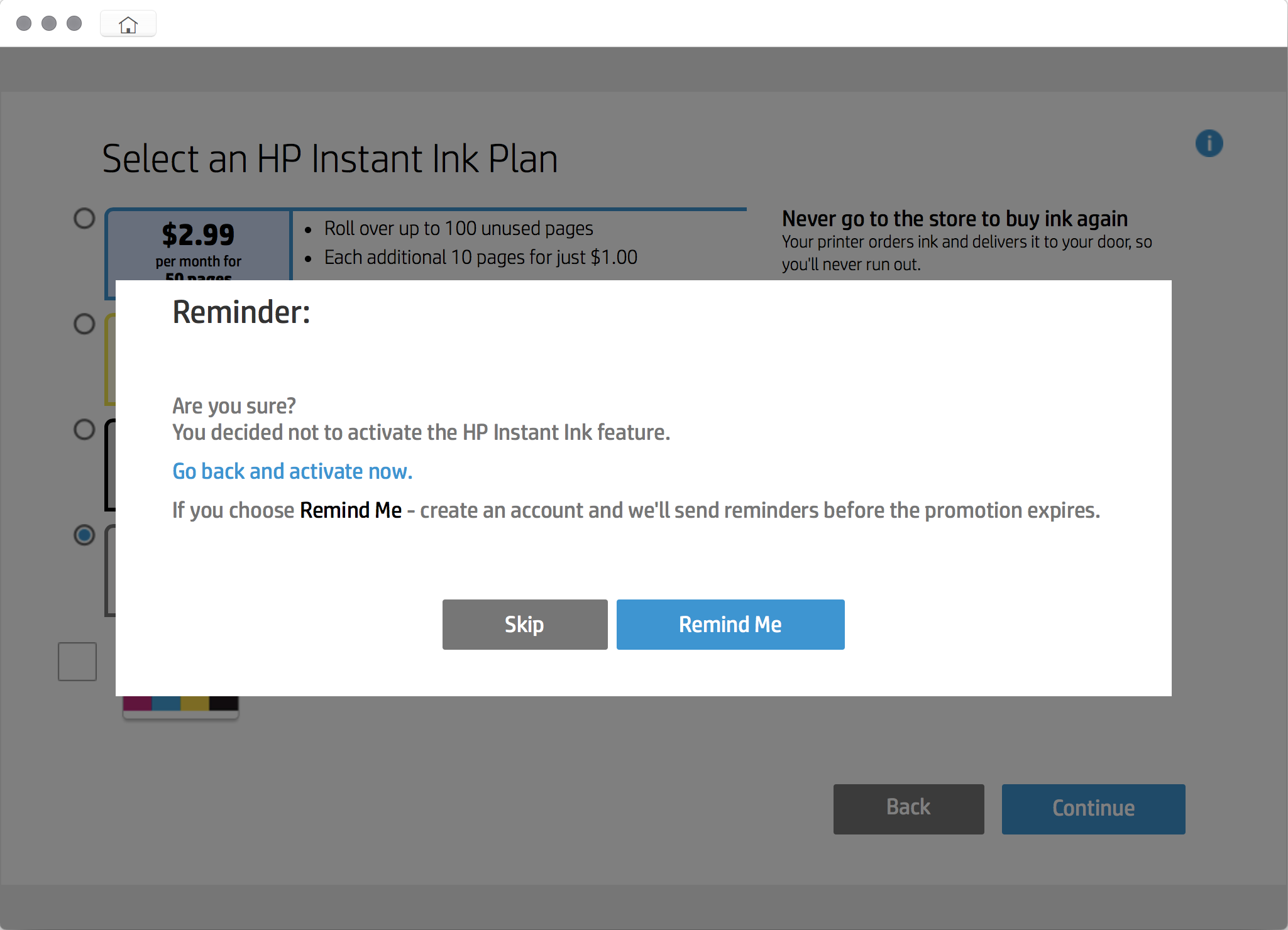 But it is only then, once the user has found the combination of “Next” and “Cancel” buttons that lead out of the swamp of hard sells and bad deals, that they are confronted with their biggest test: the “Data Collection Notice & Settings”. 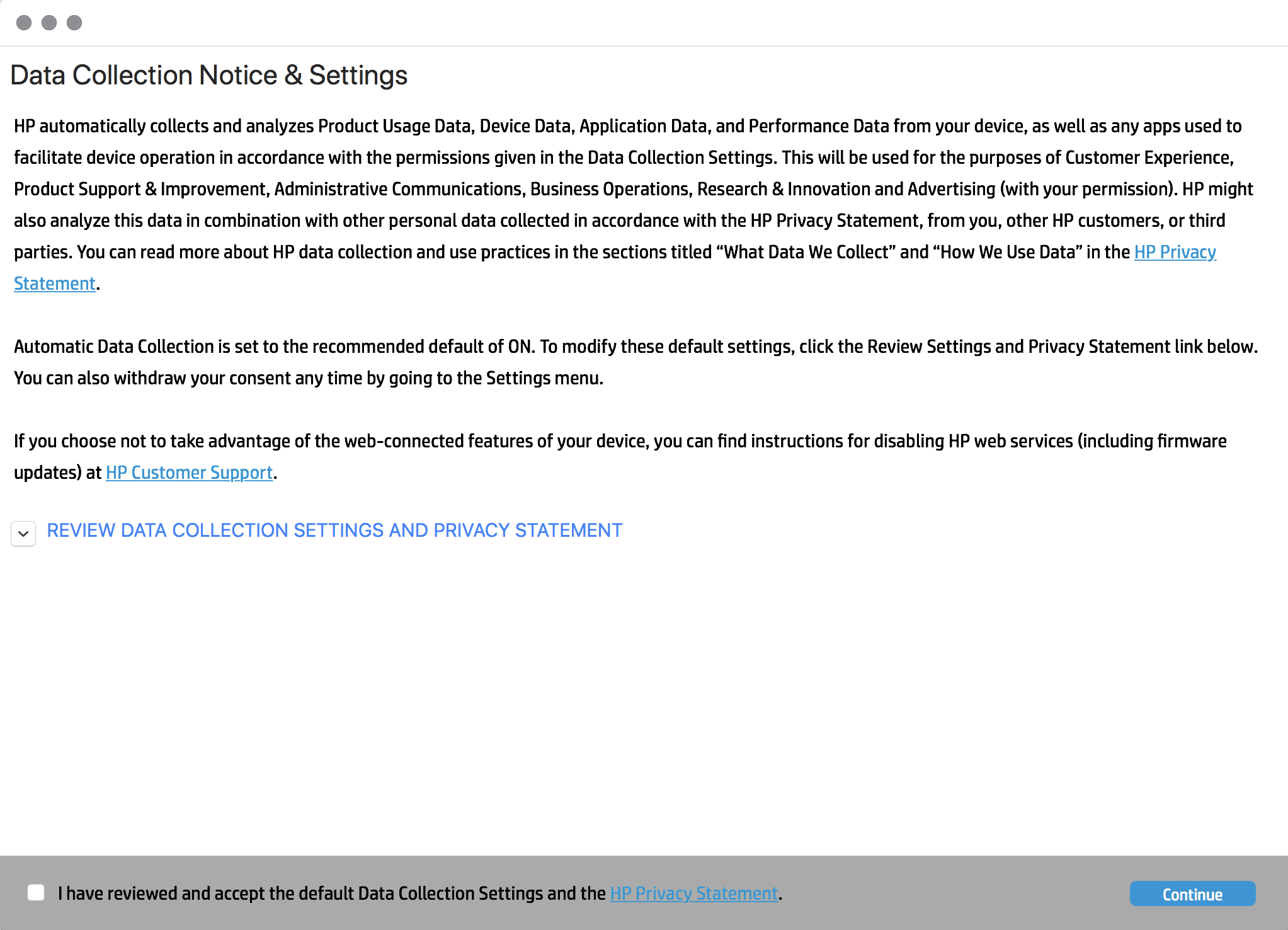 In summary, HP wants its printer to collect all kinds of data that a reasonable person would never expect it to. This includes metadata about your devices, as well as information about all the documents that you print, including timestamps, number of pages, and the application doing the printing (HP state that they do stop short of looking at the contents of your documents). From the HP privacy policy, linked to from the setup program:

Product Usage Data – We collect product usage data such as pages printed, print mode, media used, ink or toner brand, file type printed (.pdf, .jpg, etc.), application used for printing (Word, Excel, Adobe Photoshop, etc.), file size, time stamp, and usage and status of other printer supplies. We do not scan or collect the content of any file or information that might be displayed by an application.

HP wants to use the data they collect for a wide range of purposes, the most eyebrow-raising of which is for serving advertising. Note the last column in this “Privacy Matrix”, which states that “Product Usage Data” and “Device Data” (amongst many other types of data) are collected and shared with “service providers” for purposes of advertising.

HP delicately balances short-term profits with reasonable-man-ethics by only half-obscuring the checkboxes and language in this part of the setup. 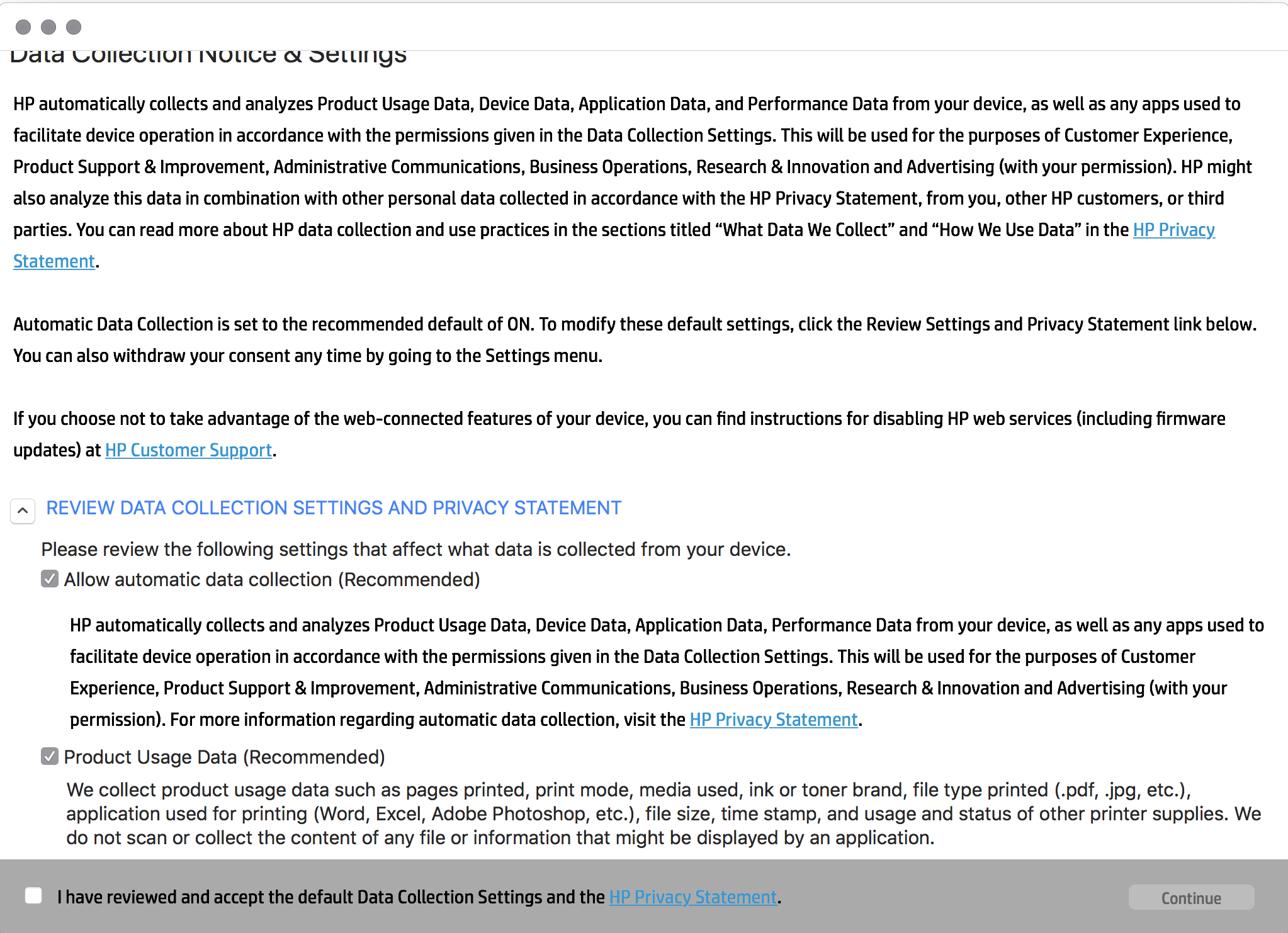 At this point everything has become clear – the job of this setup app is not only to sell expensive ink subscriptions; it’s also to collect what apparently passes for informed consent in a court of law. I clicked the boxes to indicate “Jesus Christ no, obviously not, why would anyone ever knowingly consent to that”, and then spent 5 minutes Googling how to make sure that this setting was disabled. My research suggests that it’s controlled by an item in the settings menu of the printer itself labelled “Store anonymous usage information”. However, I don’t think any reasonable person would think that the meaning of “Store anonymous usage information” includes “send analytics data back to HP’s servers so that it can be used for targeted advertising”, so either HP is being deliberately coy or there’s another option that disables sending your data that I haven’t found yet.

I bet there’s also a vigorous debate to be had over whether HP’s definition of “anonymous” is the same as mine.

I imagine that a user’s data is exfiltrated back to HP by the printer itself, rather than any client-side software. Once HP has a user’s data then I don’t know what they do with it. Maybe if they can see that you are printing documents from Photoshop then they can send you spam for photo paper? I also don’t know anything about how much a user’s data is worth. My guess is that it’s depressingly little. I’d almost prefer it if HP was snatching highly valuable information that was worth making a high-risk, high-reward play for. But I can’t help but feel like they’re just grabbing whatever data is lying around because they might as well, it might be worth a few cents, and they (correctly) don’t anticipate any real risk to their reputation and bottom line from doing so.

Source: HP printers try to send data back to HP about your devices and what you print | Robert Heaton