Watkins, a self-described privacy advocate whose mother and grandmother shredded personal information when he was growing up, said he is unwilling to complete the identity verification process his state now requires, which includes having his face analyzed by a little-known company called ID.me.
He sent a sharply worded letter to his state’s unemployment agency criticizing ID.me’s service, saying he would not take part in it given his privacy concerns. In response, he received an automated note from the agency: “If you do not verify your identity soon, your claim will be disqualified and no further benefit payments will be issued.” (A spokesperson for the Colorado Department of Labor and Employment said the agency only allows manual identity verification “as a last resort” for unemployment claimants who are under 18 — because ID.me doesn’t work with minors — and those who have “technological barriers.”)
[…]
Watkins is one of millions across the United States who are being instructed to use ID.me, along with its facial recognition software, to get their unemployment benefits. A rapidly growing number of US states, including Colorado, California and New York, turned to ID.me in hopes of cutting down on a surge of fraudulent claims for state and federal benefits that cropped up during the pandemic alongside a tidal wave of authentic unemployment claims.
As of this month, 27 states’ unemployment agencies had entered contracts with ID.me, according to the company, with 25 of them already using its technology. ID.me said it is in talks with seven more. ID.me also verifies user identities for numerous federal agencies, such as the Department of Veterans Affairs, Social Security Administration and IRS.
[…]
The face-matching technology ID.me employs comes from a San Francisco-based startup called Paravision
[…]
Facial recognition technology, in general, is contentious. Civil rights groups frequently oppose it for privacy issues and other potential dangers. For instance, it has been shown to be less accurate when identifying people of color, and several Black men, at least, have been wrongfully arrested due to the use of facial recognition. It’s barely regulated — there are no federal laws governing its use, though some states and local governments have passed their own rules to limit or prohibit its use. Despite these concerns, the technology has been used across the US federal government, as a June report from the Government Accountability Office showed.
Several ID.me users told CNN Business about problems they had verifying their identities with the company, which ranged from the facial recognition technology failing to recognize their face to waiting for hours to reach a human for a video chat after encountering problems with the technology. A number of people who claim to have had issues with ID.me have taken to social media to beg the company for help with verification, express their own concerns about its face-data collection or simply rant, often in response to ID.me’s own posts on Twitter. And some like Watkins are simply frustrated not to have a say in the matter.
[…]
ID.me said it does not sell user data — which includes biometric and related information such as selfies people upload, data related to facial analyses, and recordings of video chats users participate in with ID.me — but it does keep it. Biometric data, like the facial geometry produced from a user’s selfie, may be kept for years after a user closes their account.
Hall said ID.me keeps this information only for auditing purposes, particularly for government agencies in cases of fraud or identity theft. Users, according to its privacy policy, can ask ID.me to delete personally identifiable information it has gathered from them, but the company “may keep track of certain information if required by law” and may not be able to “completely delete” all user information since it “periodically” backs up such data. (As Ryan Calo, codirector of the University of Washington’s Tech Policy Lab, put it, this data retention policy is “pretty standard,” but, he added, that “doesn’t make it great!”)
[…]
Beyond state unemployment agencies, ID.me is also becoming more widespread among federal agencies such as the IRS, which in June began using ID.me to verify identities of people who want to use its Child Tax Credit Update Portal.
“We’re verifying more than 1% of the American adult population each quarter, and that’s starting to compress more to like 45 or 50 days,” Hall said. The company has more than 50 million users, he said, and signs up more than 230,000 new ones each day.
[…]
Vasquez said that, when a state chooses to use a tool it knows has a tendency to not work as well on some people, she thinks that “starts to invade something more than privacy and get at questions of what society values and how it values different members’ work and what our society believes about dignity.”
Hall claims ID.me’s facial recognition software is over 99% accurate and said an internal test conducted on hundreds of faces of people who had failed to pass the facial recognition check for logging in to the social security website did not show statistically significant evidence of racial bias. 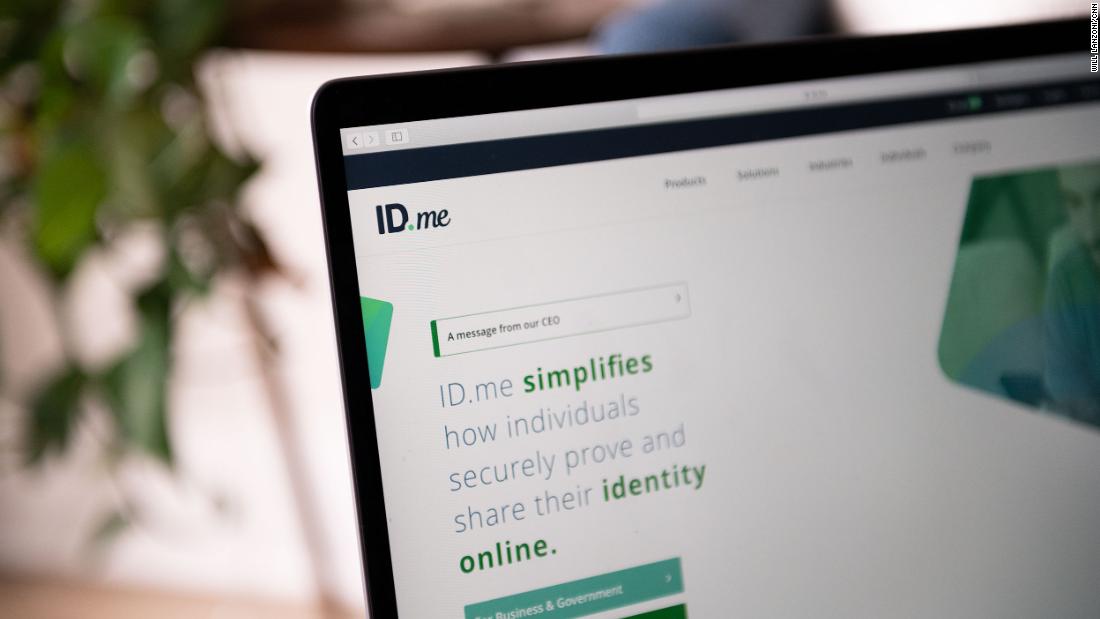 In cases where users are able to opt out of the ID.me process, it can still be arduous and time-consuming: California’s Employment Development Department website, for instance, instructs people who can’t verify their identity via ID.me when applying online to file their claim over the phone or by mail or fax.
Most people aren’t doing this, however; it’s time consuming to deal with snail mail or wade through EDD’s phone system, and many people don’t have access to a fax machine. An EDD spokesperson said that such manual identity verification, which used to be a “significant” part of EDD’s backlog, now accounts for “virtually none” of it.

Long wait times for some

Eighty-five percent of people are able to verify their identity with ID.me immediately for state workforce agencies without needing to go through a video chat, Hall said.
What happens to the remaining 15% worries Akselrod, of the ACLU, since users must have access to a device with a camera — like a smartphone or computer — as well as decent internet access. According to recent Pew research, 15% of American adults surveyed don’t have a smartphone and 23% don’t have home broadband.
“These technologies may be inaccessible for precisely the people for whom access to unemployment insurance is the most critical,” Akselrod said.
[…]

Source: Want your unemployment benefits? You may have to submit to facial recognition first – CNN

What this excellent article doesn’t go into is what a terrible idea having huge centralised databases is, especially one filled with biometric information (which you can’t change) of an entire population