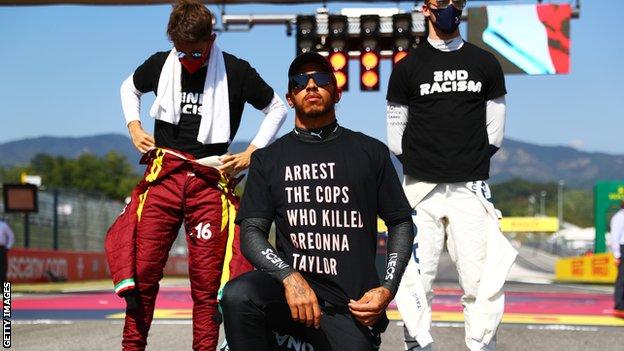 Formula 1 drivers have been told they cannot wear clothing bearing any slogans or messages while doing official duties after grands prix.

The move is a reaction to Mercedes’ Lewis Hamilton wearing a T-shirt at the last race in Tuscany referencing the case of a woman killed by US police.

The FIA said podium finishers “must remain attired only in their driving suits done up to the neck”.

This must be the case throughout the podium ceremony and interviews.

The requirements include a “medical face mask or team-branded face mask”.

The move had been expected after talks between the FIA, Mercedes and Hamilton’s representatives before this weekend’s Russian Grand Prix.

At Mugello, Hamilton wore a T-shirt saying: “Arrest the cops who killed Breonna Taylor” at the official pre-race anti-racism demonstration and on the podium and during the post-race interviews.

He had previously worn a Black Lives Matter T-shirt for the demonstration, but not after the race, while other drivers wore the FIA official “End Racism” T-shirts.

The FIA looked into whether they should investigate Hamilton on the grounds of breaking any rules, but decided against it.

Political messages have long been banned on the podium in F1.

Hamilton said at the Russian Grand Prix: “I did something that has never really happened in F1 and obviously they will stop it from happening moving forwards.”