When it comes to knowing where humans around the world actually live, resources come in varying degrees of accuracy and sophistication.

Heavily urbanized and mature economies generally produce a wealth of up-to-date information on population density and granular demographic data. In rural Africa or fast-growing regions in the developing world, tracking methods cannot always keep up, or in some cases may be non-existent.

This is where new maps, produced by researchers at Facebook, come in. Building upon CIESIN’s Gridded Population of the World project, Facebook is using machine learning models on high-resolution satellite imagery to paint a definitive picture of human settlement around the world. Let’s zoom in.

Will all other details stripped away, human settlement can form some interesting patterns. One of the most compelling examples is Egypt, where 95% of the population lives along the Nile River. Below, we can clearly see where people live, and where they don’t.

View the full-resolution version of this map. 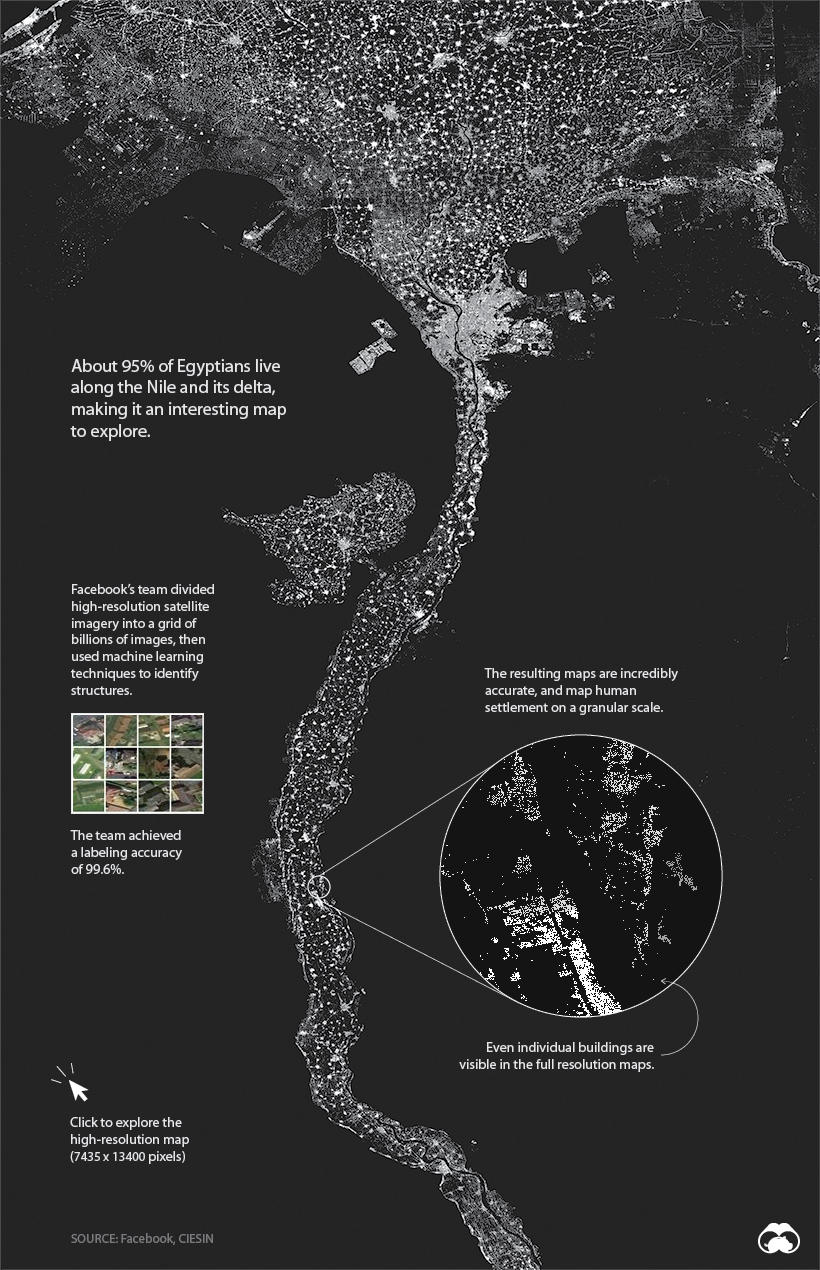 While it is possible to use a tool like Google Earth to view nearly any location on the globe, the problem is analyzing the imagery at scale. This is where machine learning comes into play.

Finding the People in the Petabytes

High-resolution imagery of the entire globe takes up about 1.5 petabytes of storage, making the task of classifying the data extremely daunting. It’s only very recently that technology was up to the task of correctly identifying buildings within all those images.

Facebook identified structures at scale using a process called weakly supervised learning. After training the model using large batches of photos, then checking over the results, Facebook was able to reach a 99.6% labeling accuracy for positive examples.

An accurate picture of where people live can be a matter of life and death.

For humanitarian agencies working in Africa, effectively distributing aid or vaccinating populations is still a challenge due to the lack of reliable maps and population density information. Researchers hope that these detailed maps will be used to save lives and improve living conditions in developing regions.

For example, Malawi is one of the world’s least urbanized countries, so finding its 19 million citizens is no easy task for people doing humanitarian work there. These maps clearly show where people live and allow organizations to create accurate population density estimates for specific areas.

Visit the project page for a full explanation and to access the full database of country maps.

Source: How Facebook is Using Machine Learning to Map the World Population