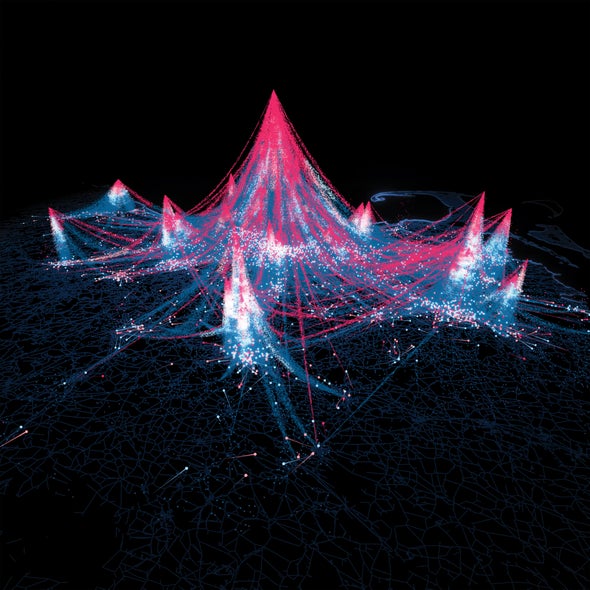 The people who happen to be in a city center at any given moment may seem like a random collection of individuals. But new research featuring a simple mathematical law shows that urban travel patterns worldwide are, in fact, remarkably predictable regardless of location—an insight that could enhance models of disease spread and help to optimize city planning.

Studying anonymized cell-phone data, researchers discovered what is known as an inverse square relation between the number of people in a given urban location and the distance they traveled to get there, as well as how frequently they made the trip. It may seem intuitive that people visit nearby locations frequently and distant ones less so, but the newly discovered relation puts the concept into specific numerical terms. It accurately predicts, for instance, that the number of people coming from two kilometers away five times per week will be the same as the number coming from five kilometers twice a week. The researchers’ new visitation law, and a versatile model of individuals’ movements within cities based on it, was reported in Nature.

The researchers analyzed data from about eight million people between 2006 and 2013 in six urban locations: Boston, Singapore, Lisbon and Porto in Portugal, Dakar in Senegal, and Abidjan in Ivory Coast. Previous analyses have used cell-phone data to study individuals’ travel paths; this study focused instead on locations and examined how many people were visiting, from how far and how frequently. The researchers found that all the unique choices people make—from dropping kids at school to shopping or commuting—obey this inverse square law when considered in aggregate. “The result is very simple but quite startling,” says Geoffrey West, an urban scaling theorist at the Santa Fe Institute and one of the paper’s senior authors.

“Those organizational patterns have really profound implications on how COVID will spread,” Scarpino says. In a smaller rural location, where many people regularly go to the same church or grocery store, the entire town will experience sharp peaks of infections as the virus sweeps through the community. But in a bigger city, the propagation takes longer, he explains, because mini epidemics can occur in each neighborhood somewhat separately.

Stewart adds: “The authors demonstrate that their visitation law—that takes into account both travel distance and frequency of visits in a way that other models do not—outperforms gravity models when it comes to predicting flows between locations.”