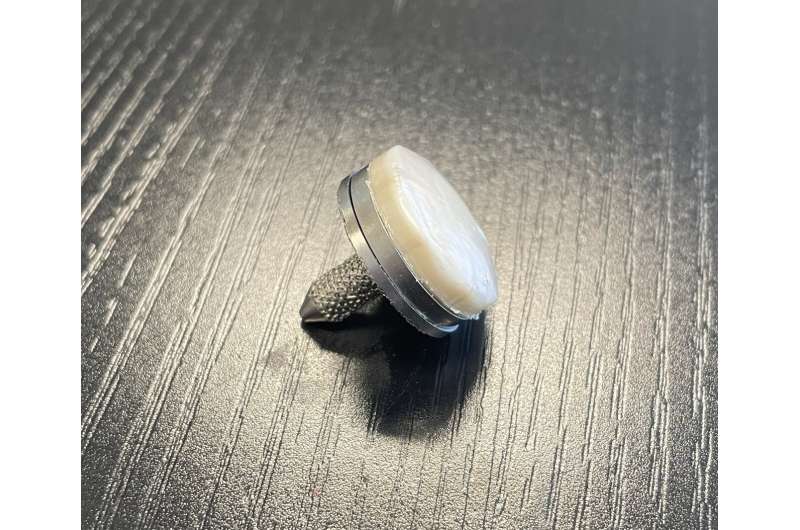 […] Writing in the journal Advanced Functional Materials, a Duke University-led team says they have created the first gel-based cartilage substitute that is even stronger and more durable than the real thing.

Mechanical testing reveals that the Duke team’s hydrogel—a material made of water-absorbing polymers—can be pressed and pulled with more force than natural cartilage, and is three times more resistant to wear and tear.

To make this material, the Duke team took thin sheets of cellulose fibers and infused them with a polymer called polyvinyl alcohol—a viscous goo consisting of stringy chains of repeating molecules—to form a gel.

The cellulose fibers act like the collagen fibers in natural cartilage, Wiley said—they give the gel strength when stretched. The polyvinyl alcohol helps it return to its original shape. The result is a Jello-like material, 60% water, which is supple yet surprisingly strong.

Natural cartilage can withstand a whopping 5,800 to 8,500 pounds per inch of tugging and squishing, respectively, before reaching its breaking point. Their lab-made version is the first hydrogel that can handle even more. It is 26% stronger than natural cartilage in tension, something like suspending seven grand pianos from a key ring, and 66% stronger in compression—which would be like parking a car on a postage stamp.

In the past, researchers attempting to create stronger hydrogels used a freeze-thaw process to produce crystals within the gel, which drive out water and help hold the polymer chains together. In the new study, instead of freezing and thawing the hydrogel, the researchers used a heat treatment called annealing to coax even more crystals to form within the polymer network.

By increasing the crystal content, the researchers were able to produce a gel that can withstand five times as much stress from pulling and nearly twice as much squeezing relative to freeze-thaw methods.

The improved strength of the annealed gel also helped solve a second design challenge: securing it to the joint and getting it to stay put.

Cartilage forms a thin layer that covers the ends of bones so they don’t grind against one another. Previous studies haven’t been able to attach hydrogels directly to bone or cartilage with sufficient strength to keep them from breaking loose or sliding off. So the Duke team came up with a different approach.

Their method of attachment involves cementing and clamping the hydrogel to a titanium base. This is then pressed and anchored into a hole where the damaged cartilage used to be. Tests show the design stays fastened 68% more firmly than natural cartilage on bone.

In wear tests, the researchers took artificial cartilage and natural cartilage and spun them against each other a million times, with a pressure similar to what the knee experiences during walking. Using a high-resolution X-ray scanning technique called micro-computed tomography (micro-CT), the scientists found that the surface of their lab-made version held up three times better than the real thing. Yet because the hydrogel mimics the smooth, slippery, cushiony nature of real cartilage, it protects other joint surfaces from friction as they slide against the implant.