The Defense Advanced Research Projects Agency has moved into the next phase of its Control of Revolutionary Aircraft with Novel Effectors program, or CRANE. The project is centered on an experimental uncrewed aircraft, which Aurora Flight Sciences is developing, that does not have traditional moving surfaces to control the aircraft in flight.

Aurora Flight Sciences’ CRANE design, which does not yet have an official X-plane designation or nickname, instead uses an active flow control (AFC) system to maneuver the aircraft using bursts of highly pressurized air. This technology could eventually find its way onto other military and civilian designs. It could have particularly significant implications when applied to future stealth aircraft.

The Defense Advanced Research Projects Agency (DARPA) issued a press release regarding the last developments in the CRANE program yesterday. Aurora Flight Sciences, a subsidiary of Boeing, announced it had received a Phase 2 contract to continue work on this project back on December 12, 2022. 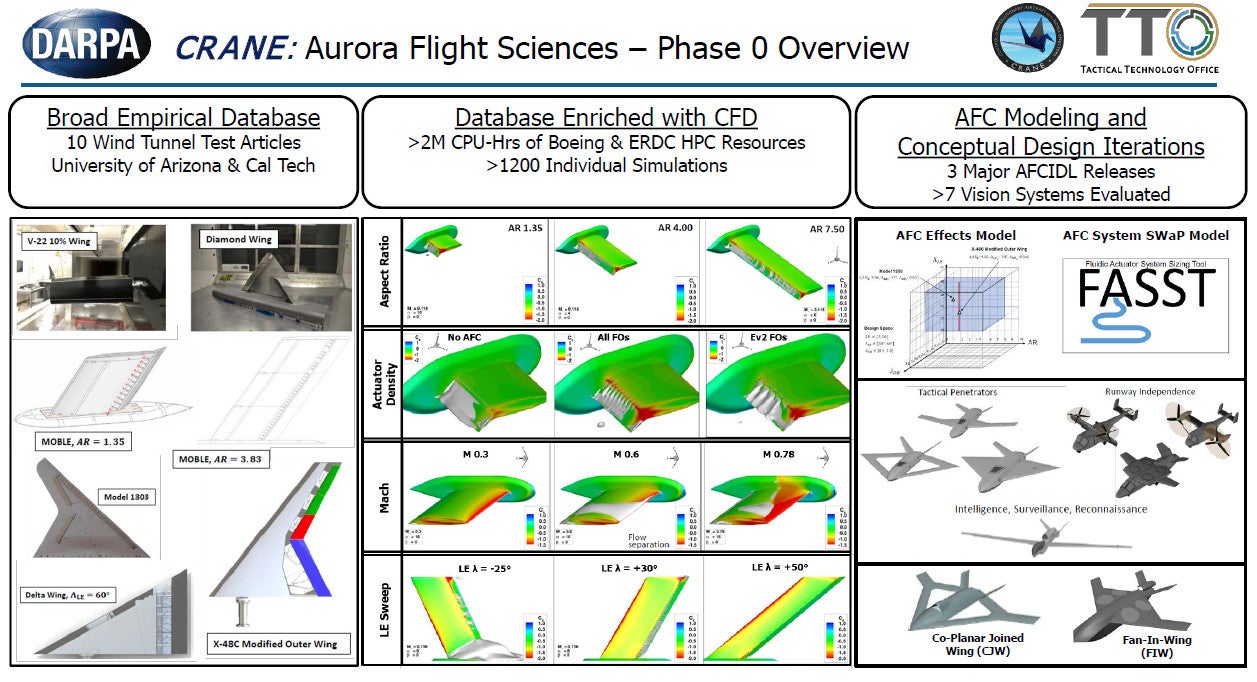 The design that Aurora ultimately settled on was more along the lines of a conventional plane. However, it has a so-called Co-Planar Joined Wing (CJW) planform consisting of two sets of wings attached to a single center fuselage that merge together at the tips, along with a twin vertical tail arrangement. As currently designed, the drone will use “banks” of nozzles installed at various points on the wings to maneuver in the air.

The aircraft’s main engine arrangement is not entirely clear. An chin air intake under the forward fuselage together with a single exhaust nozzle at the rear seen in official concept art and on wind tunnel models would seem to point to a plan to power the aircraft with a single jet engine.

Interestingly, Aurora’s design “is configured to be a modular testbed featuring replaceable outboard wings and swappable AFC effectors. The modular design allows for testing of not only Aurora’s AFC effectors but also AFC effectors of various other designs,” a company press release issued in December 2022 said. “By expanding testing capabilities beyond Aurora-designed components, the program further advances its goal to provide the confidence needed for future aircraft requirements, both military and commercial, to include AFC-enabled capabilities.”

Aurora has already done significant wind tunnel testing of subscale models with representative AFC components as part of CRANE’s Phase 1. The company, along with Lockheed Martin, was chosen to proceed to that phase of the program in 2021.

“Using a 25% scale model, Aurora conducted tests over four weeks at a wind tunnel facility in San Diego, California. In addition to 11 movable conventional control surfaces, the model featured 14 AFC banks with eight fully independent controllable AFC air supply channels,” according to a press release the company put out in May 2022.

Getting rid of traditional control surfaces inherently allows for a design to be more aerodynamic, and therefore fly in a more efficient manner, especially at higher altitudes. An aircraft with an AFC system doesn’t need the various actuators and other components to move things like ailerons and rudders, offering new ways to reduce weight and bulk.

A lighter and more streamlined aircraft design using an AFC system might be capable of greater maneuverability. This could be particularly true for uncrewed types that also do not have to worry about the physical limitations of a pilot.

The elimination of so many moving parts also means fewer things that can break, improving safety and reliability. This would do away with various maintenance and logistics requirements, too. It might make a military design more resilient to battle damage and easier to fix, as well.

The CRANE program and Aurora Flight Sciences’ design is of course not the first time AFC technology has been experimented with. U.K.-headquartered BAE Systems, which was another one of the participants in CRANE’s Phase 0, has been very publicly experimenting with various AFC concepts since at least 2010. The most recent of these developments was an AFC-equipped design called MAGMA. Described by BAE as a “large model,” this aircraft actually flew and you can read more about it here.

“Over the past several decades, the active flow control community has made significant advancements that enable the integration of active flow control technologies into advanced aircraft,” Richard Wlezein, the CRANE Program Manager at DARPA, said in a statement included in today’s press release. “We are confident about completing the design and flight test of a demonstration aircraft with AFC as the primary design consideration.”

Source: DARPA’s New X-Plane Aims To Maneuver With Nothing But Bursts Of Air