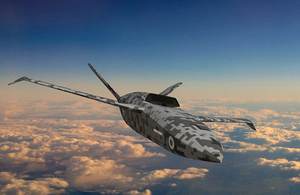 The uncrewed combat aircraft will be designed to fly at high-speed alongside fighter jets, armed with missiles, surveillance and electronic warfare technology to provide a battle-winning advantage over hostile forces. Known as a ‘loyal wingman’, these aircraft will be the UK’s first uncrewed platforms able to target and shoot down enemy aircraft and survive against surface to air missiles.

In a boost for Northern Ireland’s defence industry, Spirit AeroSystems, Belfast, have been selected to lead Team MOSQUITO in the next phase of the Project. Utilising ground-breaking engineering techniques, the team will further develop the RAF’s Lightweight Affordable Novel Combat Aircraft (LANCA) concept, with a full-scale vehicle flight-test programme expected by the end of 2023.

This game changing research and development project will ensure the final aircraft design will be capable of being easily and affordably updated with the latest technology so we remain one step ahead of our adversaries. The aircraft’s flexibility will provide the optimum protection, survivability and information as it flies alongside Typhoon, F-35 Lightning, and later, Tempest as part of our future combat air system.

ANCA originated in 2015 in Dstl to understand innovative Combat Air technologies and concepts that offer radical reductions in cost and development time and is a RAF Rapid Capabilities Office led project under the Future Combat Air System Technology Initiative (FCAS TI). The UK MOD’s Defence Science and Technology Laboratory (Dstl) provides the project management and is the MOD’s technical authority for LANCA and Project Mosquito on behalf of the RCO.