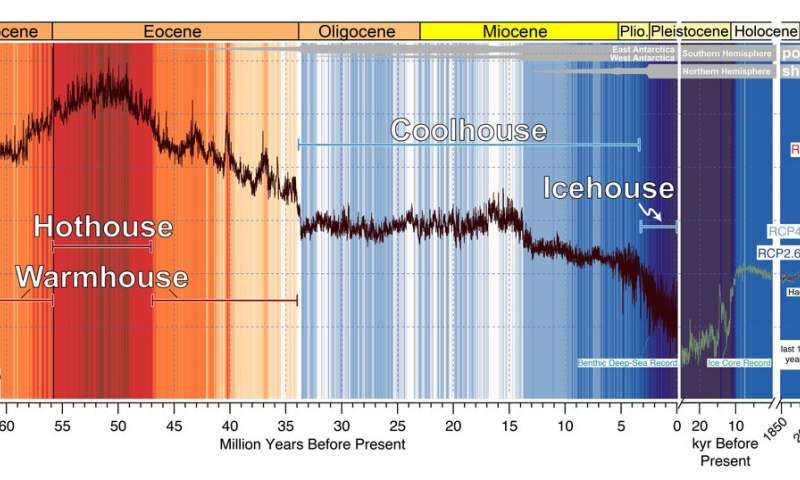 For the first time, climate scientists have compiled a continuous, high-fidelity record of variations in Earth’s climate extending 66 million years into the past. The record reveals four distinctive climate states, which the researchers dubbed Hothouse, Warmhouse, Coolhouse, and Icehouse.

These major climate states persisted for millions and sometimes tens of millions of years, and within each one the climate shows rhythmic variations corresponding to changes in Earth’s orbit around the sun. But each climate state has a distinctive response to orbital variations, which drive relatively small changes in global temperatures compared with the dramatic shifts between different climate states.

“We’ve known for a long time that the glacial-interglacial cycles are paced by changes in Earth’s orbit, which alter the amount of solar energy reaching Earth’s surface, and astronomers have been computing these orbital variations back in time,” explained coauthor James Zachos, distinguished professor of Earth and planetary sciences and Ida Benson Lynn Professor of Ocean Health at UC Santa Cruz.

“As we reconstructed past climates, we could see long-term coarse changes quite well. We also knew there should be finer-scale rhythmic variability due to orbital variations, but for a long time it was considered impossible to recover that signal,” Zachos said. “Now that we have succeeded in capturing the natural climate variability, we can see that the projected anthropogenic warming will be much greater than that.”

For the past 3 million years, Earth’s climate has been in an Icehouse state characterized by alternating glacial and interglacial periods. Modern humans evolved during this time, but greenhouse gas emissions and other human activities are now driving the planet toward the Warmhouse and Hothouse climate states not seen since the Eocene epoch, which ended about 34 million years ago. During the early Eocene, there were no polar ice caps, and average global temperatures were 9 to 14 degrees Celsius higher than today.

Critical to compiling the new climate record was getting high-quality sediment cores from deep ocean basins through the international Ocean Drilling Program (ODP, later the Integrated Ocean Drilling Program, IODP, succeeded in 2013 by the International Ocean Discovery Program). Signatures of past climates are recorded in the shells of microscopic plankton (called foraminifera) preserved in the seafloor sediments. After analyzing the sediment cores, researchers then had to develop an “astrochronology” by matching the climate variations recorded in sediment layers with variations in Earth’s orbit (known as Milankovitch cycles).

“The community figured out how to extend this strategy to older time intervals in the mid-1990s,” said Zachos, who led a study published in 2001 in Science that showed the climate response to orbital variations for a 5-million-year period covering the transition from the Oligocene epoch to the Miocene, about 25 million years ago.

“That changed everything, because if we could do that, we knew we could go all the way back to maybe 66 million years ago and put these transient events and major transitions in Earth’s climate in the context of orbital-scale variations,” he said.

Now that they have compiled a continuous, astronomically dated climate record of the past 66 million years, the researchers can see that the climate’s response to orbital variations depends on factors such as greenhouse gas levels and the extent of polar ice sheets.

“In an extreme greenhouse world with no ice, there won’t be any feedbacks involving the ice sheets, and that changes the dynamics of the climate,” Zachos explained.

Most of the major climate transitions in the past 66 million years have been associated with changes in greenhouse gas levels.

The new climate record provides a valuable framework for many areas of research, he added. It is not only useful for testing climate models, but also for geophysicists studying different aspects of Earth dynamics and paleontologists studying how changing environments drive the evolution of species.