There’s a big molecule, a protein, inside the leaves of most plants. It’s called Rubisco, which is short for an actual chemical name that’s very long and hard to remember.

Amanda Cavanagh, a biologist and post-doctoral researcher at the University of Illinois, calls herself a big fan of Rubisco. “It’s probably the most abundant protein in the world,” she says. It’s also super-important. 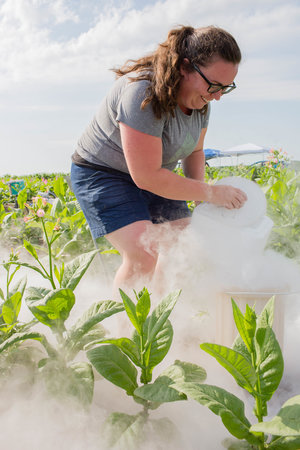 Rubisco has one job. It picks up carbon dioxide from the air, and it uses the carbon to make sugar molecules. It gets the energy to do this from the sun. This is photosynthesis, the process by which plants use sunlight to make food, a foundation of life on Earth. Yay for Rubisco!

“But it has what we like to call one fatal flaw,” Cavanagh continues. Unfortunately, Rubisco isn’t picky enough about what it grabs from the air. It also picks up oxygen. “When it does that, it makes a toxic compound, so the plant has to detoxify it.”

Plants have a whole complicated chemical assembly line to carry out this detoxification, and the process uses up a lot of energy. This means the plant has less energy for making leaves, or food for us. (There is a family of plants, including corn and sugar cane, that developed another type of workaround for Rubisco, and those plants are much more productive.)

Cavanagh and her colleagues in a research program called Realizing Increased Photosynthetic Efficiency (RIPE), which is based at the University of Illinois, have spent the last five years trying to fix Rubisco’s problem. “We’re sort of hacking photosynthesis,” she says.

They experimented with tobacco plants, just because tobacco is easy to work with. They inserted some new genes into these plants, which shut down the existing detoxification assembly line and set up a new one that’s way more efficient. And they created super tobacco plants. “They grew faster, and they grew up to 40 percent bigger” than normal tobacco plants, Cavanagh says. These measurements were done both in greenhouses and open-air field plots.