Verizon sent a big chunk of the internet down a black hole this morning – and caused outages at Cloudflare, Facebook, Amazon, and others – after it wrongly accepted a network misconfiguration from a small ISP in Pennsylvania, USA.

For nearly three hours, web traffic that was supposed to go to some of the biggest names online was instead accidentally rerouted through a steel giant based in Pittsburgh.

It all started when new internet routes for more than 20,000 IP address prefixes – roughly two per cent of the internet – were wrongly announced by regional US ISP DQE Communications: this announcement informed the sprawling internet’s backbone equipment to thread netizens’ traffic through DQE and one of its clients, steel giant Allegheny Technologies, a redirection that was then, mindbogglingly, accepted and passed on to the world by Verizon, a trusted major authority on the internet’s highways and byways. This happened because Allegheny is also a customer of Verizon: it too announced the route changes to Verizon, which disseminated them further.

And so, systems around the planet were automatically updated, and connections destined for Facebook, Cloudflare, and others, ended up going through DQE and Allegheny, which buckled under the strain, causing traffic to disappear into a black hole. 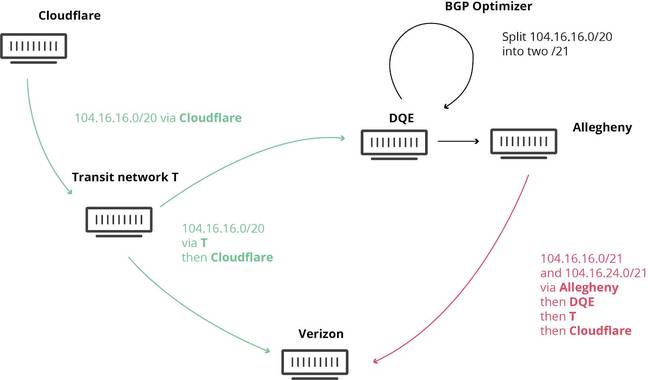 Diagram showing how network routes were erroneously announced to Verizon via DQE and Allegheny … Click to enlarge. Source: Cloudflare

Internet engineers blamed a piece of automated networking software – a BGP optimizer built by Noction – that was used by DQE to improve its connectivity. And even though these kinds of misconfigurations happen every day, there is significant frustration and even disbelief that a US telco as large as Verizon would pass on this amount of incorrect routing information.