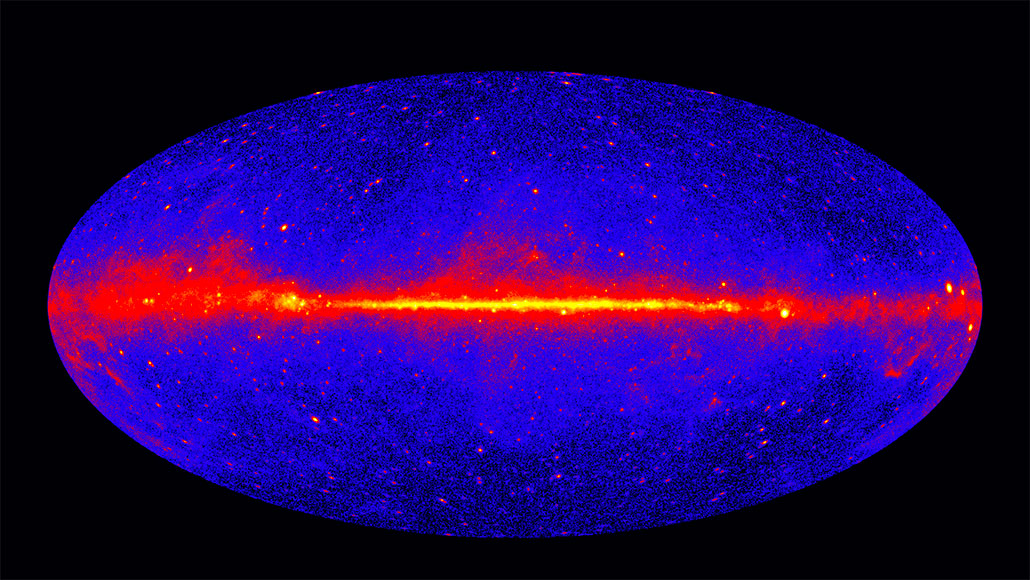 Our galaxy is a whole lot bigger than it looks. New work finds that the Milky Way stretches nearly 2 million light-years across, more than 15 times wider than its luminous spiral disk. The number could lead to a better estimate of how massive the galaxy is and how many other galaxies orbit it.

Astronomers have long known that the brightest part of the Milky Way, the pancake-shaped disk of stars that houses the sun, is some 120,000 light-years across (SN: 8/1/19). Beyond this stellar disk is a disk of gas. A vast halo of dark matter, presumably full of invisible particles, engulfs both disks and stretches far beyond them (SN: 10/25/16). But because the dark halo emits no light, its diameter is hard to measure.

Now, Alis Deason, an astrophysicist at Durham University in England, and her colleagues have used nearby galaxies to locate the Milky Way’s edge. The precise diameter is 1.9 million light-years, give or take 0.4 million light-years, the team reports February 21 in a paper posted at arXiv.org.

To put that size into perspective, imagine a map in which the distance between the sun and the Earth is just one inch. If the Milky Way’s heart were at the center of the Earth, the galaxy’s edge would be four times farther away than the moon actually is.

Using existing telescope observations, Deason and her colleagues found a similar plunge in the speeds of small galaxies near the Milky Way. This occurred at a distance of about 950,000 light-years from the Milky Way’s center, marking the galaxy’s edge, the scientists say. The edge is 35 times farther from the galactic center than the sun is.

Although dark matter makes up most of the Milky Way’s mass, the simulations reveal that stars should also exist at these far-out distances. “Both have a well-defined edge,” Deason says. “The edge of the stars is very sharp, almost like the stars just stop at a particular radius.”

Source: Astronomers have found the edge of the Milky Way at last | Science News