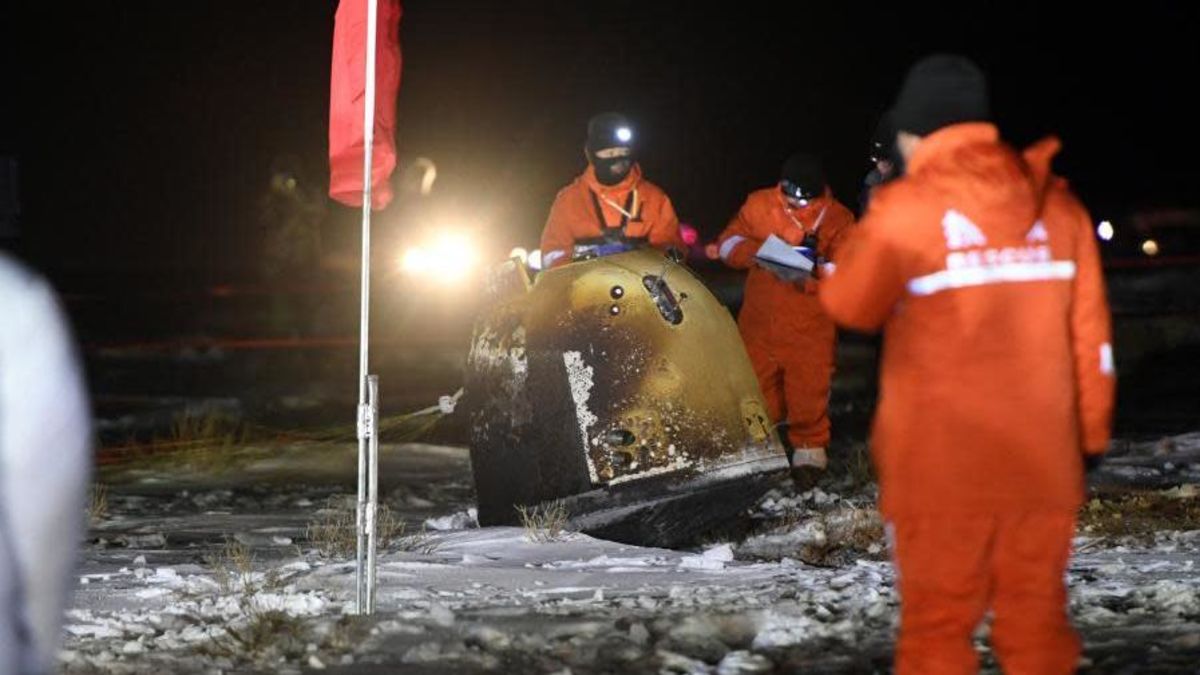 For the first time in 44 years, a spacecraft has brought lunar samples to Earth. With the Chang’e 5 mission complete, China now joins a very exclusive club, reinforcing the country’s role as a major player in space exploration.

China is now only the third country to collect samples from the Moon and bring them to Earth. The last time this happened was in 1976, when the Soviet Union did the same as part of its Luna 24 mission. NASA, during the course of its six Apollo missions, managed to collect and retrieve 842 pounds of lunar regolith and rocks.

The capsule was 3,100 miles (5,000 km) above the southern Atlantic Ocean when it separated from the orbiter. Prior to making the big plunge, the capsule bounced off the atmosphere while traveling at 7 miles per second (11.2 km/s), which it did to reduce speed, bringing it down to a more manageable 5 miles per second (7.9 km/s). A parachute allowed it to safely drift to the surface, where it was retrieved by ground crews. As Xinhua reports, the recovery team will briefly inspect the capsule, and then fly it to Beijing for further analysis.

Specifically, the sealed samples will be “transferred to specially designed laboratories for analyses, experiments and tests so scientists can determine the extraterrestrial substances’ composition, structure and traits, thus deepening their knowledge about the history of the moon and the solar system,” according to CNSA. “A certain proportion of the samples will also be on public display to enhance science awareness among the public, especially young generations, sources close to the mission have said.”

Using its drill, the Chang’e 5 lander pulled 18 ounces (500 grams) of material from beneath the surface, while its robotic arm collected upwards of 3.5 pounds (1.5 kg). The research team will have to confirm these quantities once the capsule is opened. After storing the samples in a vacuum chamber, the lander planted a Chinese flag on the surface, bid farewell to the Moon, and then re-joined the orbiter on December 3. It marked the “first time a Chinese spacecraft has blasted off from an extraterrestrial body,” according to CNSA.