The latest prototype of SpaceX’s Starship rocket, the SN9, burst into flames as the vehicle attempted to land on Earth on Tuesday.

All eyes were on the craft after its predecessor, the SN8, exploded during touchdown in December in Boca Chica, Texas. You can watch today’s detonation in the video below. The accident occurs after six minutes into the flight (skip to 11:51 to see it burst into flames).

Like the previous launch, SN9 was also a high-altitude flight test. The vehicle got ten kilometres (32,800 feet) into the sky before shifting to a near-horizontal position to descend but, unfortunately, it exploded in the air before it could flip the right way up and touch down. 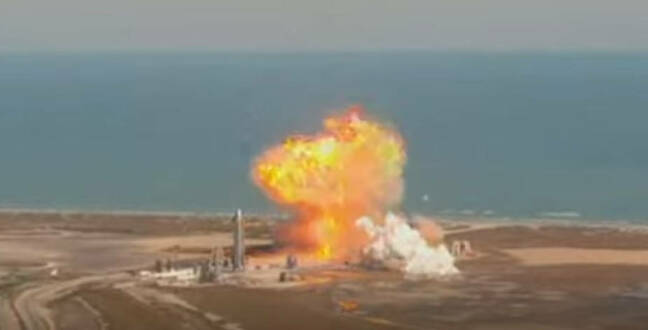 It’s not clear what caused the rapid unscheduled disassembly this time. It’s possible the rocket suffered the same mishap as SN8, considering how similar both launches unfolded. SpaceX CEO Elon Musk blamed SN8’s blowout on low pressure in the rocket’s fuel tank that caused it to meet the ground at a faster-than-desired velocity.

It has also emerged SpaceX asked the FAA for a waiver to exceed the limits of US federal public safety regulations during the SN8 launch. The regulator declined to issue the waiver, and SpaceX went ahead anyway with the fateful experiment.

As a result of that non-compliance, as the FAA put it, the agency demanded SpaceX carry out an investigation of the explosion and make changes to its public safety procedures in light of the failure. Those changes were approved by the regulator this week, and SpaceX was thus permitted to launch its SN9 craft.

wouldn’t be too happy getting on Musk’s rockets