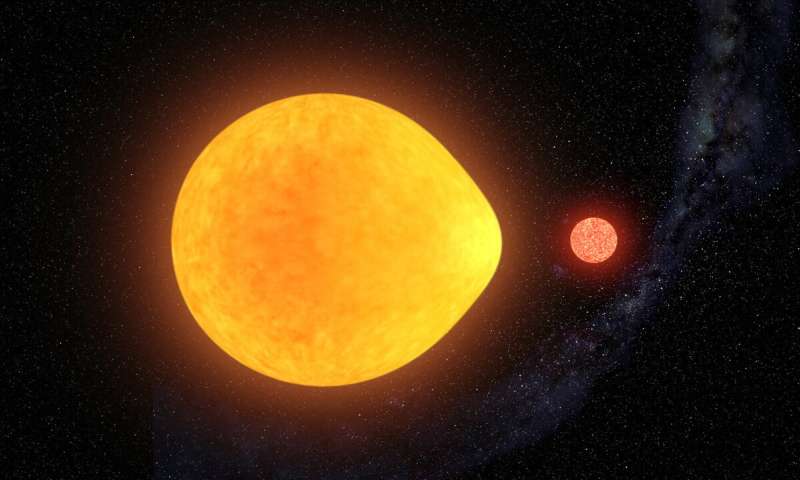 A star that pulsates on just one side has been discovered in the Milky Way about 1500 light years from Earth. It is the first of its kind to be found and scientists expect to find many more similar systems as technology to listen inside the beating hearts of stars improves.

Stars that pulsate have been known in astronomy for a long time. Our own Sun dances to its own rhythms. These rhythmic pulsations of the stellar surface occur in young and in old stars, and can have long or short periods, a wide range of strengths and different causes.

There is however one thing that all these stars had thus far in common: the oscillations were always visible on all sides of the star. Now an international team, including researchers from the University of Sydney, has discovered a star that oscillates largely over one hemisphere.

The scientists have identified the cause of the unusual single-sided pulsation: the star is located in a binary star system with a red dwarf. Its close companion distorts the oscillations with its gravitational pull. The clue that led to its discovery came from citizen scientists poring over public data from NASA’s TESS satellite, which is hunting for planets around distant stars.

The orbital period of the binary system, at less than two days, is so short that the larger star is being distorted into a tear-drop shape by the gravitational pull of the companion.

To their surprise the team observed that the strength of the pulsations depended on the aspect angle under which the star was observed, and the corresponding orientation of the star within the binary. This means the pulsation strength varies with the same period as that of the binary.

“As the binary stars orbit each other we see different parts of the pulsating star,” said Dr. David Jones at the Instituto de Astrofisica de Canarias and co-author of the study. “Sometimes we see the side that points towards the companion star, and sometimes we see the outer face.”

This is how the astronomers could be certain that the pulsations were only found on one side of the star, with the tiny fluctuations in brightness always appearing in their observations when the same hemisphere of the star was pointed towards the telescope.