This first images from NSF’s Inouye Solar Telescope show a close-up view of the sun’s surface, which can provide important detail for scientists. The image shows a pattern of turbulent “boiling” plasma that covers the entire sun. The cell-like structures—each about the size of Texas—are the signature of violent motions that transport heat from the inside of the sun to its surface. That hot solar plasma rises in the bright centers of “cells,” cools off and then sinks below the surface in dark lanes in a process known as convection. (See video available with this news release.) 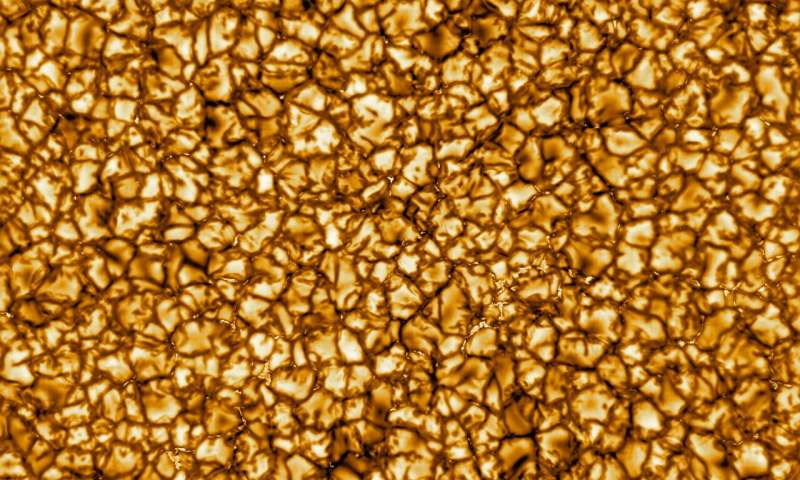 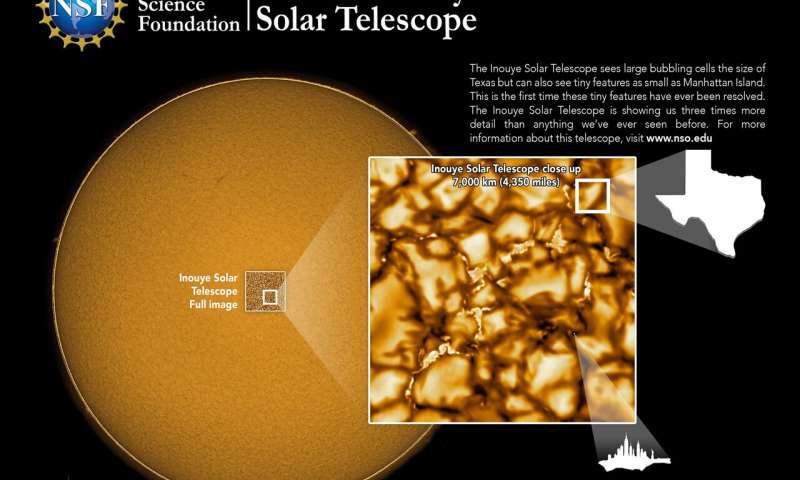 Solar magnetic fields constantly get twisted and tangled by the motions of the sun’s plasma. Twisted magnetic fields can lead to solar storms that can negatively affect our technology-dependent modern lifestyles. During 2017’s Hurricane Irma, the National Oceanic and Atmospheric Administration reported that a simultaneous space weather event brought down radio communications used by first responders, aviation and maritime channels for eight hours on the day the hurricane made landfall.

Finally resolving these tiny magnetic features is central to what makes the Inouye Solar Telescope unique. It can measure and characterize the sun’s magnetic field in more detail than ever seen before and determine the causes of potentially harmful solar activity.

“It’s all about the magnetic field,” said Thomas Rimmele, director of the Inouye Solar Telescope. “To unravel the sun’s biggest mysteries, we have to not only be able to clearly see these tiny structures from 93 million miles away but very precisely measure their magnetic field strength and direction near the surface and trace the field as it extends out into the million-degree corona, the outer atmosphere of the sun.”

Better understanding the origins of potential disasters will enable governments and utilities to better prepare for inevitable future space weather events. It is expected that notification of potential impacts could occur earlier—as much as 48 hours ahead of time instead of the current standard, which is about 48 minutes. This would allow for more time to secure power grids and critical infrastructure and to put satellites into safe mode.

Focusing 13 kilowatts of solar power generates enormous amounts of heat—heat that must be contained or removed. A specialized cooling system provides crucial heat protection for the telescope and its optics. More than seven miles of piping distribute coolant throughout the observatory, partially chilled by ice created on site during the night.

The dome enclosing the telescope is covered by thin cooling plates that stabilize the temperature around the telescope, helped by shutters within the dome that provide shade and air circulation. The “heat-stop” (a high-tech, liquid-cooled metal donut) blocks most of the sunlight’s energy from the main mirror, allowing scientists to study specific regions of the sun with unparalleled clarity.

“This image is just the beginning,” said David Boboltz, program director in NSF’s division of astronomical sciences and who oversees the facility’s construction and operations. “Over the next six months, the Inouye telescope’s team of scientists, engineers and technicians will continue testing and commissioning the telescope to make it ready for use by the international solar scientific community. The Inouye Solar Telescope will collect more information about our sun during the first 5 years of its lifetime than all the solar data gathered since Galileo first pointed a telescope at the sun in 1612.”