All the planets of our solar system are encased in a magnetic bubble, carved out in space by the Sun’s constantly outflowing material, the solar wind. Outside this bubble is the interstellar medium — the ionized gas and magnetic field that fills the space between stellar systems in our galaxy. One question scientists have tried to answer for years is on the shape of this bubble, which travels through space as our Sun orbits the center of our galaxy. Traditionally, scientists have thought of the heliosphere as a comet shape, with a rounded leading edge, called the nose, and a long tail trailing behind.

Research published in Nature Astronomy in March and featured on the journal’s cover for July provides an alternative shape that lacks this long tail: the deflated croissant. 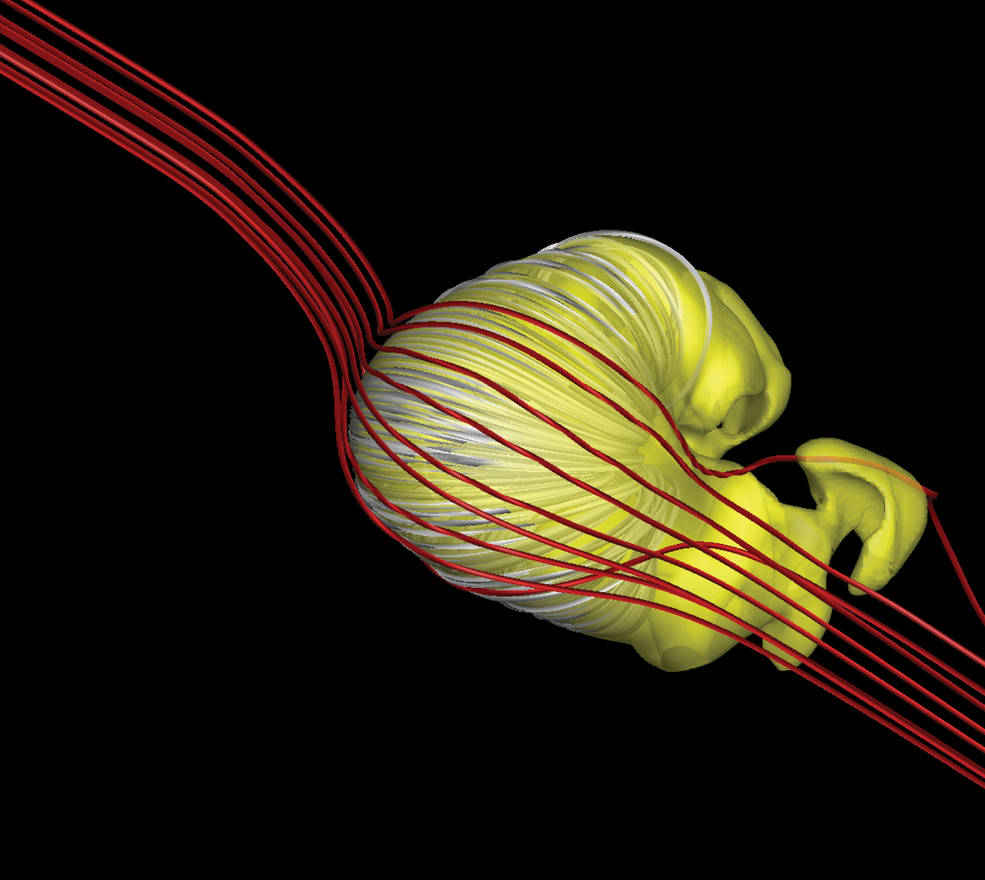 An updated model suggests the shape of the Sun’s bubble of influence, the heliosphere (seen in yellow), may be a deflated croissant shape, rather than the long-tailed comet shape suggested by other research.
Credits: Opher, et al

“There are two fluids mixed together. You have one component that is very cold and one component that is much hotter, the pick-up ions,” said Opher, a professor of astronomy at Boston University. “If you have some cold fluid and hot fluid, and you put them in space, they won’t mix — they will evolve mostly separately. What we did was separate these two components of the solar wind and model the resulting 3D shape of the heliosphere.”

Considering the solar wind’s components separately, combined with Opher’s earlier work using the solar magnetic field as a dominant force in shaping the heliosphere, created a deflated croissant shape, with two jets curling away from the central bulbous part of the heliosphere, and notably lacking the long tail predicted by many scientists.

“Because the pick-up ions dominate the thermodynamics, everything is very spherical. But because they leave the system very quickly beyond the termination shock, the whole heliosphere deflates,” said Opher.

The shape of our shield

The shape of the heliosphere is more than a question of academic curiosity: The heliosphere acts our solar system’s shield against the rest of the galaxy. 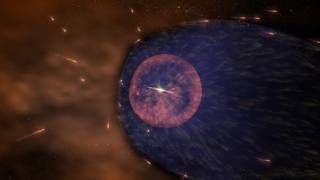 Energetic events in other star systems, like supernova, can accelerate particles to nearly the speed of light. These particles rocket out in all directions, including into our solar system. But the heliosphere acts as a shield: It absorbs about three-quarters of these tremendously energetic particles, called galactic cosmic rays, that would make their way into our solar system.

Those that do make it through can wreak havoc. We’re protected on Earth by our planet’s magnetic field and atmosphere, but technology and astronauts in space or on other worlds are exposed. Both electronics and human cells can be damaged by the effects of galactic cosmic rays — and because galactic cosmic rays carry so much energy, they’re difficult to block in a way that’s practical for space travel. The heliosphere is spacefarers’ main defense against galactic cosmic rays, so understanding its shape and how that influences the rate of galactic cosmic rays pelting our solar system is a key consideration for planning robotic and human space exploration.

The heliosphere’s shape is also part of the puzzle for seeking out life on other worlds. The damaging radiation from galactic cosmic rays can render a world uninhabitable, a fate avoided in our solar system because of our strong celestial shield. As we learn more about how our heliosphere protects our solar system — and how that protection may have changed throughout the solar system’s history — we can look for other star systems that might have similar protection. And part of that is the shape: Are our heliospheric lookalikes long-tailed comet shapes, deflated croissants, or something else entirely?