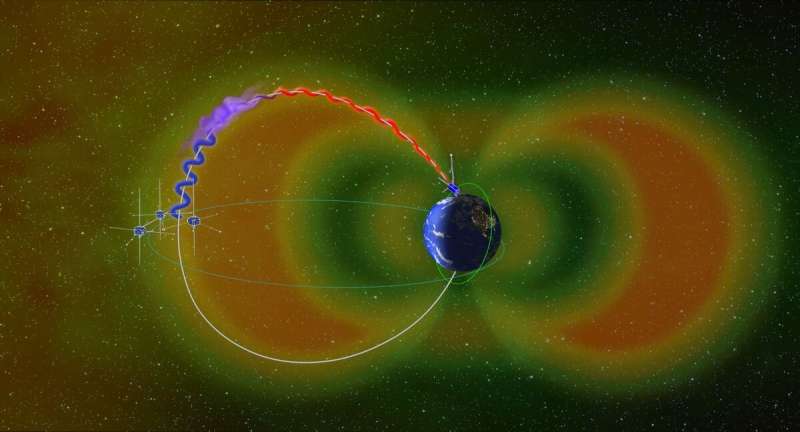 The researchers observed unexpected, rapid “electron precipitation” from low-Earth orbit using the ELFIN mission, a pair of tiny satellites built and operated on the UCLA campus by undergraduate and graduate students guided by a small team of staff mentors.

By combining the ELFIN data with more distant observations from NASA’s THEMIS spacecraft, the scientists determined that the sudden downpour was caused by whistler waves, a type of electromagnetic wave that ripples through plasma in space and affects electrons in the Earth’s magnetosphere, causing them to “spill over” into the atmosphere

Central to that chain of events is the near-Earth space environment, which is filled with charged particles orbiting in giant rings around the planet, called Van Allen radiation belts. Electrons in these belts travel in Slinky-like spirals that literally bounce between the Earth’s north and south poles. Under certain conditions, whistler waves are generated within the radiation belts, energizing and speeding up the electrons. This effectively stretches out the electrons’ travel path so much that they fall out of the belts and precipitate into the atmosphere, creating the electron rain. 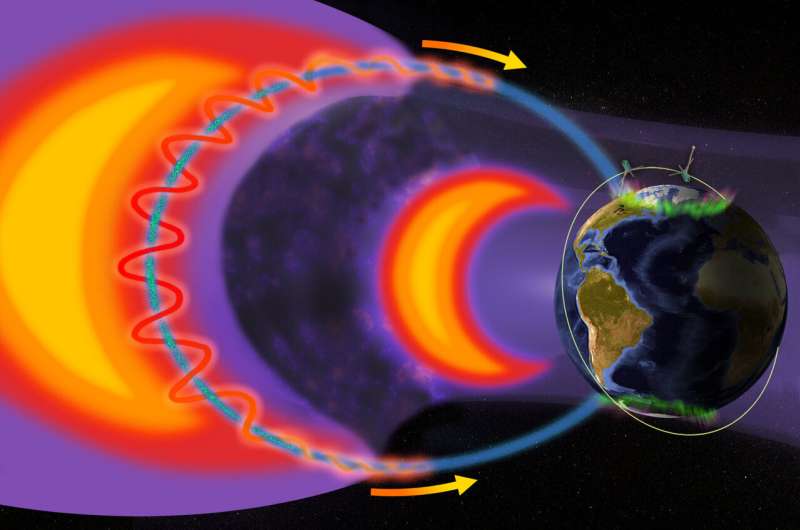 One can imagine the Van Allen belts as a large reservoir filled with water—or, in this case, electrons, said Vassilis Angelopolous, a UCLA professor of space physics and ELFIN’s principal investigator. As the reservoir fills, water periodically spirals down into a relief drain to keep the basin from overflowing. But when large waves occur in the reservoir, the sloshing water spills over the edge, faster and in greater volume than the relief drainage. ELFIN, which is downstream of both flows, is able to properly measure the contributions from each.

The researchers further showed that this type of radiation-belt electron loss to the atmosphere can increase significantly during geomagnetic storms, disturbances caused by enhanced solar activity that can affect near-Earth space and Earth’s magnetic environment.