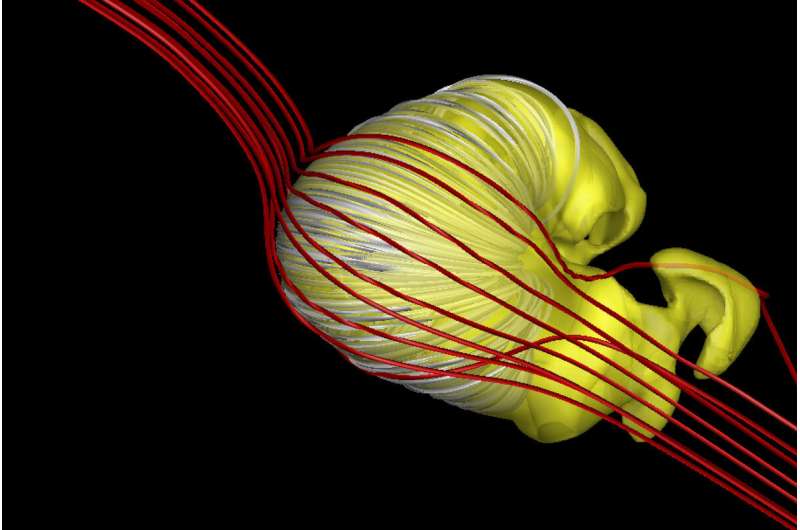 Opher’s team has constructed some of the most compelling computer simulations of the heliosphere, based on models built on observable data and theoretical astrophysics.

a paper published by Opher and collaborators in Astrophysical Journal reveals that neutral hydrogen particles streaming from outside our solar system most likely play a crucial role in the way our heliosphere takes shape.

models predict that the heliosphere, traveling in tandem with our sun and encompassing our solar system, doesn’t appear to be stable. Other models of the heliosphere developed by other astrophysicists tend to depict the heliosphere as having a comet-like shape, with a jet—or a “tail”—streaming behind in its wake. In contrast, Opher’s model suggests the heliosphere is shaped more like a croissant or even a donut.

The reason for that? Neutral hydrogen particles, so-called because they have equal amounts of positive and negative charge that net no charge at all.

“They come streaming through the solar system,” Opher says. Using a computational model like a recipe to test the effect of ‘neutrals’ on the shape of the heliosphere, she “took one ingredient out of the cake—the neutrals—and noticed that the jets coming from the sun, shaping the heliosphere, become super stable. When I put them back in, things start bending, the center axis starts wiggling, and that means that something inside the heliospheric jets is becoming very unstable.”

Instability like that would theoretically cause disturbance in the solar winds and jets emanating from our sun, causing the heliosphere to split its shape—into a croissant-like form. Although astrophysicists haven’t yet developed ways to observe the actual shape of the heliosphere, Opher’s model suggests the presence of neutrals slamming into our solar system would make it impossible for the heliosphere to flow uniformly like a shooting comet. And one thing is for sure—neutrals are definitely pelting their way through space.