Saturn’s largest moon, Titan, is the only moon in our solar system that has a thick atmosphere. It’s four times denser than Earth’s. And now, scientists have discovered a molecule in it that has never been found in any other atmosphere.

The particle is called cyclopropenylidene, or C3H2, and it’s made of carbon and hydrogen. This simple carbon-based molecule could be a precursor that contributes to chemical reactions that may create complex compounds. And those compounds could be the basis for potential life on Titan.
The molecule was first noticed as researchers used the Atacama Large Millimeter/submillimeter Array of telescopes in Chile. This radio telescope observatory captures a range of light signatures, which revealed the molecule among the unique chemistry of Titan’s atmosphere.
The study published earlier this month in the Astronomical Journal.
“When I realized I was looking at cyclopropenylidene, my first thought was, ‘Well, this is really unexpected,'” said lead study author Conor Nixon, planetary scientist at NASA’s Goddard Space Flight Center in Greenbelt, Maryland, in a statement.
Cyclopropenylidene has been detected elsewhere across our galaxy, mainly in molecular clouds of gas and dust including the Taurus Molecular Cloud. This cloud, where stars are born, is located 400 light-years away in the Taurus constellation. In these clouds, temperatures are too cold for many chemical reactions to occur.

Cyclopropenylidene has now been detected only in the Taurus Molecular Cloud and in the atmosphere of Titan.
But finding it in an atmosphere is a different story. This molecule can react easily when it collides with others to form something new. The researchers were likely able to spot it because they were looking through the upper layers of Titan’s atmosphere, where the molecule has fewer gases it can interact with.
“Titan is unique in our solar system,” Nixon said. “It has proved to be a treasure trove of new molecules.” 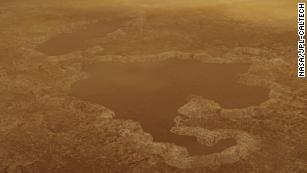 Saturn’s moon Titan is largely covered in organic material, new evidence shows
Cyclopropenylidene is the second cyclic or closed-loop molecule detected at Titan; the first was benzene in 2003. Benzene is an organic chemical compound composed of carbon and hydrogen atoms. On Earth, benzene is found in crude oil, is used as an industrial chemical and occurs naturally in the wake of volcanoes and forest fires.
Cyclic molecules are crucial because they form the backbone rings for the nucleobases of DNA, according to NASA.
[…]