When Robbie Barrat trained an AI to study and reproduce classical nude paintings, he expected something at least recognizable. What the AI produced instead was unfamiliar and unsettling, but still intriguing. The “paintings” look like flesh-like ice cream, spilling into pools that only vaguely recall a woman’s body. Barrat told Gizmodo these meaty blobs, disturbing and unintentional as they are, may impact both art and AI. 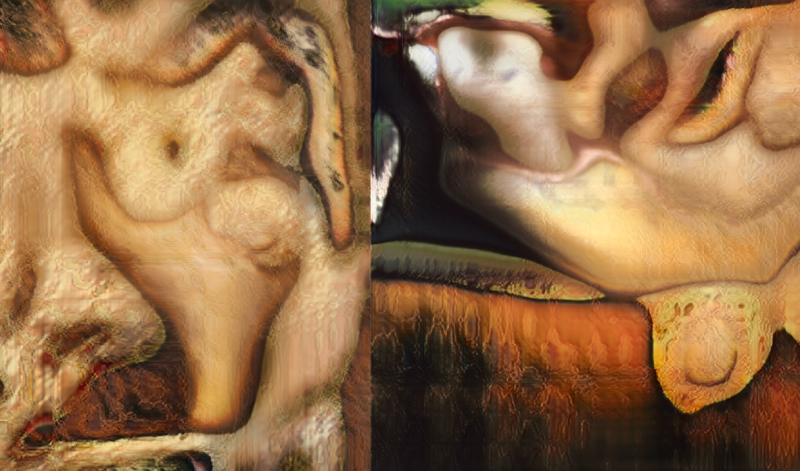 “Before, you would be feeding the computer a set of rules it would execute perfectly, with no room for interpretation by the computer,” Barrat said via email. “Now with AI, it’s all about the machine’s interpretation of the dataset you feed it—in this case how it (strangely) interprets the nude portraits I fed it.”

AI’s influence is certainly more pronounced in this project than in most computer generated art, but while that wasn’t what Barrat intended, he says the results were much better this way.

“Would I want the results to be more realistic? Absolutely not,” he said. “I want to get AI to generate new types of art we haven’t seen before; not force some human perspective on it.”

Barrat explained the process of training the AI to produce imagery of a curving body from some surreal parallel universe:

“I used a dataset of thousands of nude portraits I scraped, along with techniques from a new paper that recently came out called ‘Progressive Growing of GANs’ to generate the images,” he said. “The generator tries to generate paintings that fool the discriminator, and the discriminator tries to learn how to tell the difference between ‘fake’ paintings that the generator feeds it, and real paintings from the dataset of nude portraits.”

As Barrat pointed out on Twitter, this method of working with a computer program has some art history precedent. Having an AI execute the artist’s specific directions is reminiscent of instructional art—a conceptual art technique, best exampled by Sol LeWitt, where artists provide specific instructions for others to create the artwork. (For example: Sol LeWitt’s Wall Drawing, Boston Museum: “On a wall surface, any continuous stretch of wall, using a hard pencil, place fifty point at random. The points should be evenly distributed over the area of the wall. All of the points should be connected by straight lines.”)

Giving the AI limited autonomy to create art may be more than just a novelty, it may eventually lead to a truly new form of generating art with entirely new subjectivities.

“I want to use AI to make its own new and original artworks, not just get AI to mimic things that people were making in the 1600’s.”