In a ritual I’ve undertaken at least a thousand times, I lift my head to consult an airport display and determine which gate my plane will depart from. Normally, that involves skimming through a sprawling list of flights to places I’m not going. This time, however, all I see is information meant just for me:

Stranger still, a leather-jacketed guy standing next to me is looking at the same display at the same time—and all he sees is his own travel information:

Okay, confession time: I’m not at an airport. Instead, I’m visiting the office of Misapplied Sciences, a Redmond, Washington, startup located in a dinky strip mall whose other tenants include a teppanyaki joint and a children’s hair salon. Albert is not another traveler but rather the company’s cofounder and CEO, Albert Ng. We’ve been play-acting our way through a demo of the company’s display, which can show different things to different people at one time—no special glasses, smartphone-camera trickery, or other intermediary technology required. The company calls it parallel reality.

The simulated airport terminal is only one of the scenarios that Ng and his cofounder Dave Thompson show off for me in their headquarters. They also set up a mock store with a Pikachu doll, a Katy Perry CD, a James Bond DVD, and other goods, all in front of one screen. When I glance up at it, I see video related to whichever item I’m standing near. In a makeshift movie theater, I watch The Sound of Music with closed captions in English on a display above the movie screen, while Ng sits one seat over and sees Chinese captions on the same display. And I flick a wand to control colored lights on Seattle’s Space Needle (or for the sake of the demo, a large poster of it).

At one point, just to definitively prove that their screen can show multiple images at once, Ng and Thompson push a grid of mirrors up in front of it. Even though they’re all reflecting the same screen, each shows an animated sequence based on the flag or map of a different country. 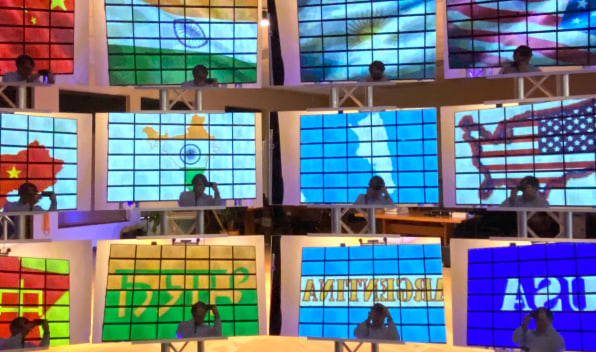 […]
The potential applications for the technology—from outdoor advertising to traffic signs to theme-park entertainment—are many. But if all goes according to plan, the first consumers who will see it in action will be travelers at the Detroit Metropolitan Airport. Starting in the middle of this year, Delta Air Lines plans to offer parallel-reality signage, located just past TSA, that can simultaneously show almost 100 customers unique information on their flights, once they’ve scanned their boarding passes. Available in English, Spanish, Japanese, Korean, and other languages, it will be a slicked-up, real-world deployment of the demo I got in Redmond.
[…]

At a January 2014 hackathon, a researcher named Paul Dietz came up with an idea to synchronize crowds in stadiums via a smartphone app that gave individual spectators cues to stand up, sit down, or hold up a card. The idea was to “use people as pixels,” he says, by turning the entire audience into a giant, human-powered animated display. It worked. “But the participants complained that they were so busy looking at their phones, they couldn’t enjoy the effect,” Dietz remembers.

That led him to wonder if there was a more elegant way to signal individuals in a crowd, such as beaming different colors to different people. As part of this investigation, he set up a pocket projector in an atrium and projected stripes of red and green. “The projector was very dim,” he says. “But when I looked into it from across the atrium, it was this beautiful, bright, saturated green light. Then I moved over a few inches into a red stripe, and then it looked like an intense red light.”

Based on this discovery, Dietz concluded that it might be possible to create displays that precisely aimed differing images at people depending on their position. Later in 2014, that epiphany gave birth to Misapplied Sciences, which he cofounded with Ng—who’d been his Microsoft intern while studying high-performance computing at Stanford—and Thompson, whom Dietz had met when both were creating theme-park experiences at Walt Disney Imagineering.

the basic principle—directing different colors in different directions—remains the same. With garden-variety screens, the whole idea is to create a consistent picture, and the wider the viewing angle, the better. By contrast, with Misapplied’s displays, “at one time, a single pixel can emit green light towards you,” says Ng. “Whereas simultaneously that same pixel can emit red light to the person next to you.”

In one version of the tech, it can control the display in 18,000 directions; in another, meant for large-scale outdoor signage, it can control it in a million. The company has engineered display modules that can be arranged, Lego-like, in different configurations that allow for signage of varying sizes and shapes. A Windows PC performs the heavy computational lifting, and there’s software that lets a user assign different images to different viewing positions by pointing and clicking. As displays reach the market, Ng says that the price will “rival that of advanced LED video walls.” Not cheap, maybe, but also not impossibly stratospheric.

For all its science-fiction feel, parallel reality does have its gotchas, at least in its current incarnation. In the demos I saw, the pixels were blocky, with a noticeable amount of space around them—plus black bezels around the modules that make up a sign—giving the displays a look reminiscent of a sporting-arena electronic sign from a few generations back. They’re also capable of generating only 256 colors, so photos and videos aren’t exactly hyperrealistic. Perhaps the biggest wrinkle is that you need to stand at least 15 feet back for the parallel-reality effect to work. (Venture too close, and you see one mishmashed image.)

The other part of the equation is figuring out which traveler is standing where, so people see their own flight details. Delta is accomplishing that with a bit of AI software and some ceiling-mounted cameras. When you scan your boarding pass, you get associated with your flight info—not through facial recognition, but simply as a discrete blob in the cameras’ view. As you roam near the parallel-reality display, the software keeps tabs on your location, so that the signage can point your information at your precise spot.

Delta is taking pains to alleviate any privacy concerns relating to this system. “It’s all going to be housed on Delta systems and Delta software, and it’s always going to be opt-in,” says Robbie Schaefer, general manager of Delta’s airport customer experience. The software won’t store anything once a customer moves on, and the display won’t display any highly sensitive information. (It’s possible to steal a peek at other people’s displays, but only by invading their personal space—which is what I did to Ng, at his invitation, to see for myself.)

The other demos I witnessed at Misapplied’s office involved less tracking of individuals and handling of their personal data. In the retail-store scenario, for instance, all that mattered was which product I was standing in front of. And in the captioning one, the display only needed to know what language to display for each seat, which involved audience members using a smartphone app to scan a QR code on their seat and then select a language.