Senator Richard Burr is a real piece of work. In 2012 he was one of only three Senators to vote against the STOCK Act. This was a law put in place following a 60 Minutes expose about how Congress was getting filthy stinkin’ rich off of insider trading, since Congress was exempt from insider trading laws. The bill did pass — Burr’s vote against notwithstanding — and President Obama signed into law. Unfortunately, the next year, Congress passed (and Obama signed) an amendment that rolled the rules back for staffers, though it still does apply to elected officials themselves.

So, it’s quite interesting to see the news that Senator Burr just sold off a “significant percentage” of his stock holdings, according to a ProPublica article detailing the sale. A big chunk of that stock sale? In the hospitality industry that has been so hard hit. He had a big chunk of stock in Wyndam Hotels and Extended Stay America, but sold those off just before everything went bad. The timing is interesting:

Soon after he offered public assurances that the government was ready to battle the coronavirus, the powerful chairman of the Senate Intelligence Committee, Richard Burr, sold off a significant percentage of his stocks, unloading between $628,000 and $1.72 million of his holdings on Feb. 13 in 33 separate transactions.

As the head of the intelligence committee, Burr, a North Carolina Republican, has access to the government’s most highly classified information about threats to America’s security. His committee was receiving daily coronavirus briefings around this time, according to a Reuters story.

Now, you might say that there might be another reason why he sold stuff off, but it certainly appears that Burr knew full well what was coming. And that’s because in another news bombshell from just a few hours earlier, a recording was leaked of Burr telling a private luncheon gathering that things were going to be bad — all at the same time he was insisting that the US was totally prepared for COVID-19. A month after he sold all that stock, and a few weeks after he told the private luncheon that the coronavirus was “much more aggressive in its transmission than anything that we have seen in recent history” and compared it “to the 1918 pandemic” he publicly was claiming that we had everything under control:

“Luckily, we have a framework in place that has put us in a better position than any other country to respond to a public health threat, like the coronavirus.”

He also said the same thing just days before selling all that stock:

Thankfully, the United States today is better prepared than ever before to face emerging public health threats, like the coronavirus, in large part due to the work of the Senate Health Committee, Congress, and the Trump Administration.

The public health preparedness and response framework that Congress has put in place and that the Trump Administration is actively implementing today is helping to protect Americans. Over the years, this framework has been designed to be flexible and innovative so that we are not only ready to face the coronavirus today but new public health threats in the future.

And then he sold most of his stock earning somewhere between half a million and a million and a half dollars — most of which would have plunged in value if he’d kept it invested. And, the fact that such a large chunk was in the hospitality industry is telling: he would have likely realized were going to be hit hard by any form of lock down and the expected decline in travel due to the pandemic.

Hours after the Burr story broke, The Daily Beast highlighted how another Senator, the new Senator from Georgia, Kelly Loefler, sold off millions of dollars of stock the very day she was briefed about the COVID-19 threat. She literally tweeted that day: 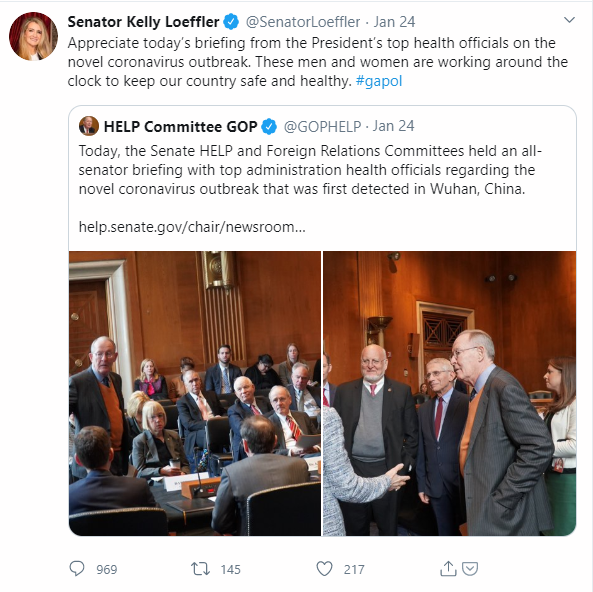 And then she dumped tons of stock:

Loeffler assumed office on Jan. 6 after having been appointed to the seat vacated by retiring Sen. Johnny Isakson. Between then and Jan. 23 she did not report a single stock transaction from accounts owned by her individually or by her and her husband jointly.

Between Jan. 24 and Feb. 14, by contrast, Loeffler reported selling stock jointly owned with her husband worth between $1,275,000 and $3,100,000, according to transaction reports filed with Senate ethics officials.

For what it’s worth, it’s probably worth noting that Loeffler’s husband, Jeffrey Sprecher, is the chairman and CEO of the New York Stock Exchange. The stock sales included a bunch of retailers: Ross Stores, TJX (owners of TJ Maxx, Marshalls and a bunch of similar brands), and Autozone. All of those are struggling — TJX just announced it’s closing all its stores for at least two weeks.

Like Burr, Loeffler toed the Trumpian line that the country was all set to handle this pandemic that (spoiler alert!) it’s still not ready to handle: 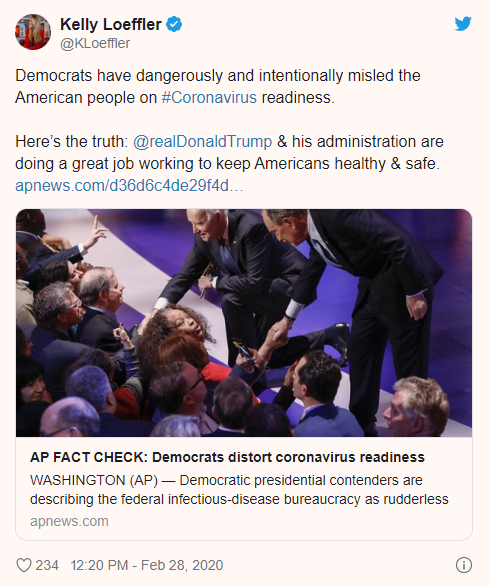 Some might argue that while she didn’t have any transactions in the weeks leading up to that coronavirus briefing, and then sold a bunch of stock, she did make two purchases of stock in that period. But those really don’t help her case:

One of Loeffler’s two purchases was stock worth between $100,000 and $250,000 in Citrix, a technology company that offers teleworking software…

Yes, sold a bunch of other stock, but purchased stock in a company that enables telework, just weeks before practically the whole country moved to telework. The other purchase? Oracle. While Oracle stock has declined along with most of the rest of the market, given how much Oracle pushes itself as a “cloud” provider, you could see someone thinking it might get a boost as well.

Given all, a little other spelunking through the newly released financial disclosures for stocks sales in this period from three other Senators as well: Ron Johnson, Dianne Feinstein, and Jim Inhofe. The details of those sales don’t look quite as suspicious as the other two, but still might raise some eyebrows. Inhofe sold a bunch of Paypal, Intuit, and Apple stock. Feinstein sold a bunch of Allogene Therapeutics stock, a biotech firm doing cancer research — so it’s not clear that that’s related to pandemic info. Johnson made a bundle: between $5 million and $25 million in selling all of his share of a plastic extrusion company, Pacur, but that’s a private family company that he ran before becoming a Senator (his brother now runs the firm), and the sale was made to a private equity firm, and shows no evidence of being connected in any way to the pandemic (indeed, the company does plastic extrusion for medical devices, and you can see why that might suddenly be in more demand these days).

In a just world, someone would be looking into the Burr and Loeffler sales as insider trading. I’m not convinced that we’re in that world right now, though. In the meantime, as many of us are isolated at home, we can rest safe, knowing that Senator Burr and Senator Loeffler socked away a bunch of money while the rest of us suffer. The only surprising thing I will note, is that Burr, at least, is now receiving heavy criticism from both Democrats and Republicans, and even Tucker Carlson — usually a trusty voice repeating Trumpian talking points, has called for Burr to resign.

Of course, it’s worth highlighting one more point: profiting off the coming disaster is horrible and disgusting and awful. But it’s much, much worse to have spent weeks or even months knowing what disaster was about to befall the country and lying to the public about it.

The potential insider trading is dreadful and possibly criminal, but what could elevate this to a historic scandal is the idea that senators may have known enough to be alarmed for themselves yet still projected rosy scenarios to the public AND failed to make sure we were ready. https://t.co/PeMktkEPFA

Source: Two Senators Sold A Bunch Of Stock After Being Briefed About COVID-19; While Telling The World Things Were Going To Be Fine | Techdirt