To make the transition to low-carbon energy sources and address climate change we need open data on the global energy system. High-quality data already exists; it is published by the International Energy Agency. But despite being an international institution that is largely publicly funded, most IEA data is locked behind paywalls. This makes it unusable in the public discourse and prevents many researchers from accessing it. Beyond this, it hinders data-sharing and collaboration; results in duplicated research efforts; makes the data unusable for the public discourse; and goes against the principles of transparency and reproducibility in scientific research. The high costs of the data excludes many from the global dialogue on energy and climate and thereby stands in the way of the IEA achieving its own mission.

We suggest that the countries that fund the IEA drop the requirement to place data behind paywalls and increase their funding – the benefits of opening this important data are much larger than the costs.

In 2018, the annual budget of the IEA was EUR 27.8 million. According to the IEA’s budget figures, revenues from its data and publication sales finance “more than one-fifth of its annual budget”. That equates to EUR 5.6 million per year. To put this figure in perspective, it is equal to 0.03% of the total public energy RD&D budget for IEA countries in 2018, which was EUR 20.7 billion.2 Or on a per capita basis split equally across IEA member countries: 0.44 cents per person per year.3

We believe that the relatively small revenues that the paywalls generate do not justify the very large downsides that these restrictions cause.

The statistical work of the IEA is of immense value. It is the only source of energy data that captures the full range of metrics needed to understand the global energy transition: from primary energy through to final energy use by sub-sector. It is the go-to source for most researchers and forms the basis of the energy systems modelling in the Intergovernmental Panel on Climate Change (IPCC) Assessment Reports.4 It is also heavily utilised in energy policy, collaborating with the United Nations Framework Convention on Climate Change (UNFCCC) on developments in energy data and analytics.

Some alternative data sources on energy exist, but none come close to the coverage and depth of the IEA data. The BP Statistical Review of World Energy, published by the multinational oil and gas company BP is the most commonly used alternative. As a freely available dataset it is widely used in research and is where the IEA would want to be – ‘at the heart of the global dialogue on energy’. But as it is published by a private fossil fuel company it has some obvious drawbacks.

The series of maps show the comparative geographical coverage of primary and final energy between the publicly available dataset from BP, and the private licensed dataset from the IEA. 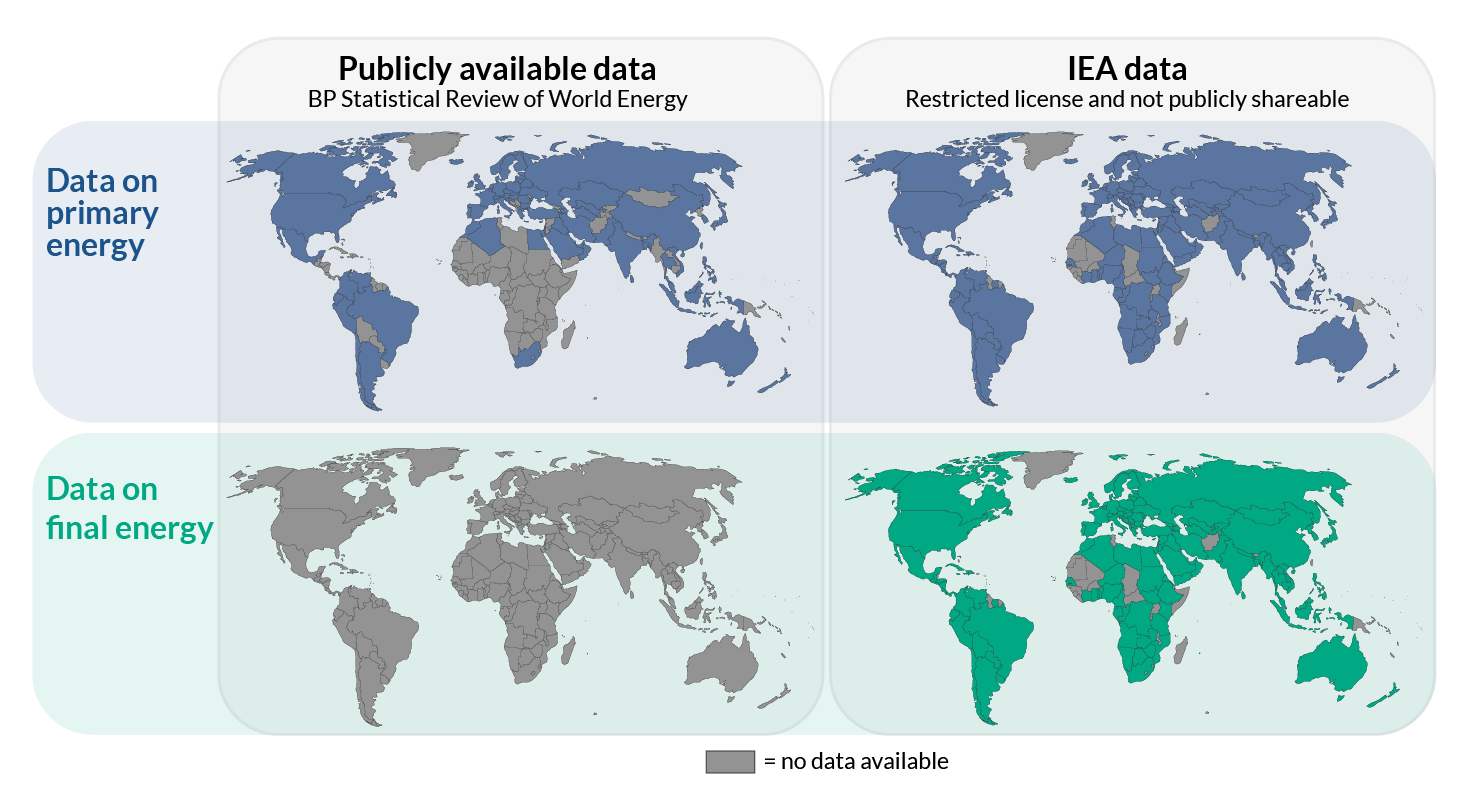 Source: The International Energy Agency publishes the detailed, global energy data we all need, but its funders force it behind paywalls. Let’s ask them to change it. – Our World in Data