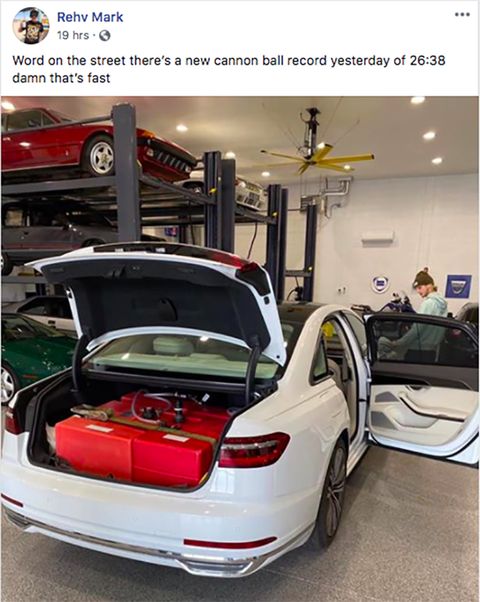 Only a few months have passed since we reported that the New York-to-Los Angeles Cannonball record was broken. It’s allegedly been broken again. The 26 hour, 38 minute time—which beats the record set in November by more than 45 minutes—appears to be legitimate, according to Ed Bolian, a Cannonball insider and driver who set his own 28 hour, 50 minute record in 2013. Alex Roy, who set the first modern NYC-to-LA record in 2006, also said the new claim is credible based on his analysis of multiple sources.

“It was not me,” Bolian was quick to point out to Road & Track, eager to quell an Internet-generated rumor that perhaps he had been the one to pull it off.

All we know about this new set of scofflaws is that there were three, maybe four of them, and that they were driving a white 2019 Audi A8 sedan with a pair of red plastic marine fuel tanks ratchet-strapped into its trunk. They started at the Red Ball Garage in New York City at 11:15 pm on April 4, and ended less than 27 hours later at the Portofino Hotel & Marina in Redondo Beach, California, the traditional start and end points of a Cannonball attempt.

We also know that their timing was awful. It doesn’t seem likely that the new record-holders were keen to have news reach the public so soon, especially at a time when so many people are understandably on edge. But an exuberant friend posted a picture of the Audi on Facebook this week—situated among a number of other high-dollar cars, with its trunk open to show the auxiliary fuel tanks—along with the team’s alleged time. Within a day, hundreds of people had shared the post, and social media chat groups were abuzz with Cannonball aficionados offering up opinions on the matter.

There’s some whining about it being in poor taste or something. Whatever.